Will the Real Future President Please Stand Up … Straight 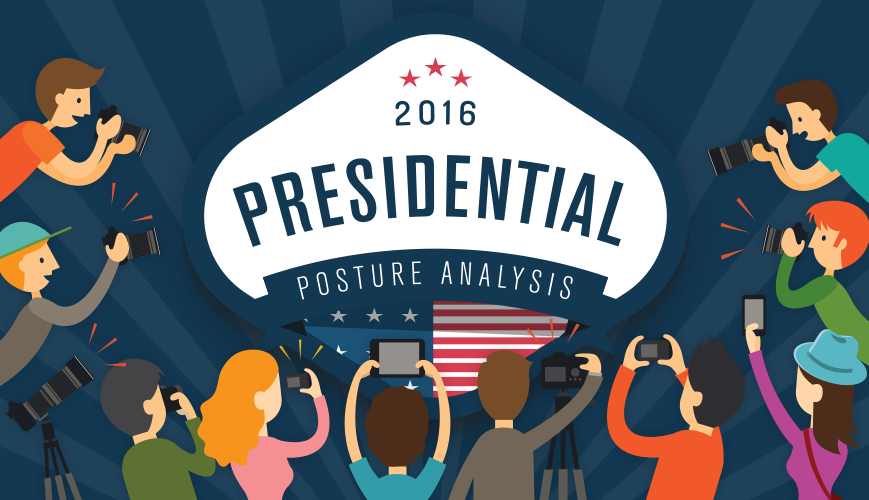 Sitting upright behind a desk, pen in hand, eyes set and stern but somehow friendly, a smile that promises hope and trust to an entire nation of eager followers. This is how we picture the leader of the free world, of our free world. No matter their personal background or ideologies, we expect our President to embody certain characteristics.

Inwardly: Strong, trustworthy, competent. Outwardly: Head high, chin up, shoulders back. Land of individuality and acceptance aside, we expect the President to look the part. At least when it comes to leadership, we seem to be a country of high expectations. But, who possesses these traits and who doesn’t? What’s the link between what we see and what we believe about the image? For all intents and purposes, it may all be in the posture -- and not just the posturing done on the campaign trail.

With the general election hurtling closer every day, doctors from the The Joint Chiropractic took a keen look at the last five candidates in the 2016 presidential campaign -- as well as some past presidents (through archival video, photos and paintings) -- and offered analysis of what posture may suggest about their potential leadership abilities. They were rated on a five-star scale.

“Posture reflects our body’s ability to deal with the demands of stress, and there’s no more stressful job than President of the United States,” says Dr. Steve Knauf, an Arizona chiropractor for The Joint. “Proper posture provides more flexibility, strength and clarity, which translates to an increased ability to endure the pressure of the presidency and thrive in the responsibility of the position.”

According to research done at the Kellogg School of Management at Northwestern University and reported by Forbes magazine, “Posture matters more than hierarchal power.”

In short, the way a person stands and presents himself -- or herself -- can give off a presence of power, or it can emanate weakness. When it comes to our potential president, the same theory rings true. Can we really tell who should be the best leader, solely based on posture?

Those considered the greatest presidents also had some of the best posture: George Washington, Abraham Lincoln and John F. Kennedy ranked within a fraction of each other when analyzed by doctors from The Joint.

Here’s a little of what was observed about the candidates still vying for the presidency:

Clinton’s posture is considered fair or slightly better than fair, hence the 3.8 out of 5 stars ranking among the doctors who sized up the posture of the candidates. On one end of the spectrum, her appearance is noted by Dr. Jim Fenton of California as “head slightly forward, indicating the desire to be in charge.”

Many would agree this description of posture is also the perfect description for Clinton’s personality: Driven, demanding, no nonsense, ready to take the bull by the horns.

On the opposite end of the spectrum, her posture may be seen by others as stiff and inflexible. One chiropractor even indicates that her posture “seems uptight,” while another observes that “Hillary moves in one-unit motions, her flexibility is 50 percent gone.”

With the former secretary’s time in office -- and truthfulness of numerous events -- in constant question, some may argue this description of a stiff and inflexible posture also sums up the former first lady’s image to a tee: A cork so tightly bound, it’s ready to pop at any moment, shooting either champagne or poison, depending on your political preference.

A candidate with a ton of controversy surrounding his campaign, the opinion on his posture is more consistent. Knauf claims The Donald appears “stiff, inflexible, and full of tension.” Other peer observations of his posture include adjectives such as “unyielding” and “aggressive.”

Though these adjectives are used solely to describe posture, the words feel oddly close to the image of Trump’s general demeanor, at least how it is portrayed in the media. Most snippets of Trump seem to indicate that he has very little in the way of tolerance or flexibility, instead pounding his message in the way of a Southern preacher, with both conviction and aggression. Coincidence that his posture and his presence match in description? As a recognized business mogul, and a candidate who seems to induce fiery passion from both sides of the debate, this may be another case of the proof in the pudding … or rather in the posture.

Few would argue against the opinion that the senator’s posture could use some work. Most comments on the posture of Sanders include nods to his “slumped shoulders,” “stooped posture,” and “shoulder rounding.” One doctor goes so far as to say that his continuous slumped posture may emanate an ongoing weakness.

Could his poor posture, in fact, be an indication to his future leadership skills? Jokes about Sander’s hippie days are abundant, and even President Obama recently called him a “pot-smoking socialist.” These remarks tend to suggest an impassioned, yet open and relaxed approach. Is his slouching posture the icing on the cake, further cementing his image in the public eye? Or does it simply show the years that he has on the fellow candidates? After all, he’s 74! Only time will tell.

When Ted Cruz and John Kasich bowed out of the race for lack of support, did America miss out on electing a candidate who embodied the Presidential look? Let’s just say America didn’t miss out on the next JFK. Or the next Richard Nixon.

Kasich (2.9 stars), the governor of Ohio, looked “tired” and “older than his 63 years.” That lack of energy apparently didn’t resonate with voters. As for Cruz (3.0 stars), the junior senator from Texas had a “cartoon appearance” based on his head leaning forward farther than his shoulders. The rest of his posture “isn’t terrible,” but it can be tough to take cartoons seriously; American voters didn’t.

Does posture really matter when it comes to politics? Is there a real link between what we perceive in their presence and who a person is and what they can accomplish? Ultimately America will decide when votes are cast for our next elected leader. But, just in case -- and for the sake of our nation -- will the next future president please stand up … straight?