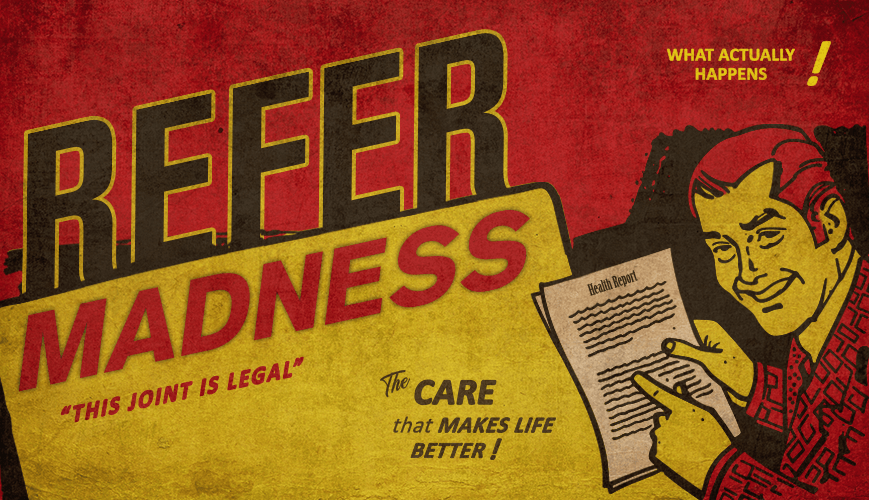 Can I tell you about Reefer Madness? It’s a cult classic about the dangers of marijuana use. If you went to college—ever—there’s no doubt you saw this movie and laughed about its message. I mean, marijuana is best known for lending economic support to delivery pizza chains. Or that’s what I’ve heard.

Honestly, there’s a strong case that all the problems people feared in the 1930s about reefer use have materialized with prescription painkillers in the United States today. When you pair that paranoia with the skepticism with which chiropractic has traditionally been viewed, it’s not surprising that a perfect storm for illness, injury and drug use was created. Today, you’d be hard-pressed to know someone who hasn’t had their life touched by addiction.

Still, the question remains: How do so many people get addicted to prescription pain pills? Well, most start off innocently enough by using them for what they are intended for – pain. What kind of pain? There’s an 80 percent chance you will develop back pain at some point in your life, so why not start there? If 80 percent of people have back pain, then what percentage go to their doctors for treatment only to be prescribed pain pills that cover up the real cause of the discomfort? This is where chiropractic care comes in. It’s safe, it’s natural and best of all, it’s effective.

In the same way that reefer madness swept America in the ‘30s, chiropractic has become the nation’s first choice for health care when attacking back and neck pain. The Joint Chiropractic has more than 340 clinics nationwide: It didn’t happen because people kept the benefit of chiropractic care to themselves.

All segments of society have utilized chiropractic: children, seniors, and everyone in-between. Basketball legend Michael Jordan said his game improved because of chiropractic. NFL great Emmitt Smith -- who also took a turn as Dancing With the Stars champion -- began using chiropractic in the mid-1990s. And through the decades, celebrities from Andy Griffith and Bob Hope to Kim Kardashian and Kelly Ripa have benefited from chiropractic.

So make like a celebrity who has discovered chiropractic awesomeness and tweet it out. Tell someone about it. It’s refer madness!

The Mayo Clinic did a little survey recently about prescription drug use in America and found a whopping 70 percent of Americans take at least one prescription pill. That’s mind-boggling! Of the prescription pills taken, the most common are antidepressants and painkillers. You’d have to be stoned to be caught off-guard by the direct correlation between regular use of pain pills and depression. Drug use is a cycle, often begun as a “treatment” for something that morphs into a habit that can be difficult to break as other problems surface.

You have to ask at this point what the pills are really meant to be treating. In my own research into chiropractic, I have found that more traditional medical approaches simply treat the symptoms, not the underlying problem. Chiropractic care wants to change that.

The Root of the Problem

There’s a need for an alternative treatment option for pain in the United States today. Think about it this way: If we can reduce the need for strong opioid painkillers and other drug-based alternatives, then maybe the compounding effects of these drugs can be reduced – mentally, physically, emotionally and even monetarily.

The real problem is people are not proactive about their health. They want to eat hot dogs at the ballpark all summer long and wash them down with a gallon of beer because, well, ‘Merica! The cold, hard truth is that not taking care of your health until problems have arisen is not the correct approach to health and wellness. Pain is much more difficult to manage once it has set in, so injuries that would not have been very difficult to treat develop into much more serious problems. Chiropractic can reduce pain and is much safer than opioid painkillers and other drug-based alternatives. Put that in your pipe and smoke it.

After all, chiropractic is legal in all 50 states.

You’re not going to hurt a chiropractor’s feelings by showing up on the treatment table because you have back or neck pain. Most people see chiropractors for this reason. It doesn’t matter what got you started with chiropractic, as long as you took the first step!

Your chiropractor’s goal is always going to be to treat the root of the problem and eliminate it, thus deep-sixing the symptoms. They’re like your own personal Terminator – “Come with me if you want to live,” I’m saying out loud in my best Austrian accent while wearing aviator glasses.

The thing is, it’s not all chiropractic hype. According to medical research, about 57 percent of people who see chiropractors regularly have a 75 percent reduction in back and neck pain compared to only a third of patients who took prescription pain pills.

Not even Mary Jane can get those kinds of results!

What Should You Do?

The answer is pretty simple, if you suffer from chronic pain and other health issues, see a chiropractor. Professionals such as those at The Joint Chiropractic want to be your partner in health and want to see you thrive, pain-free and drug-free. It may sound a little nerdy, but chiropractors don’t want to provide care to you because you’re sick – their goal is to eventually provide care to you when you’re well and keep you there by providing a pathway to wellness and a healthier, more active lifestyle. It’s all about operating at maximum performance and clarity.

So what are you waiting for? Join the madness, refer a friend to The Joint Chiropractic today.