Snap, Crackle, and Pop: The Forefathers of Chiropractic 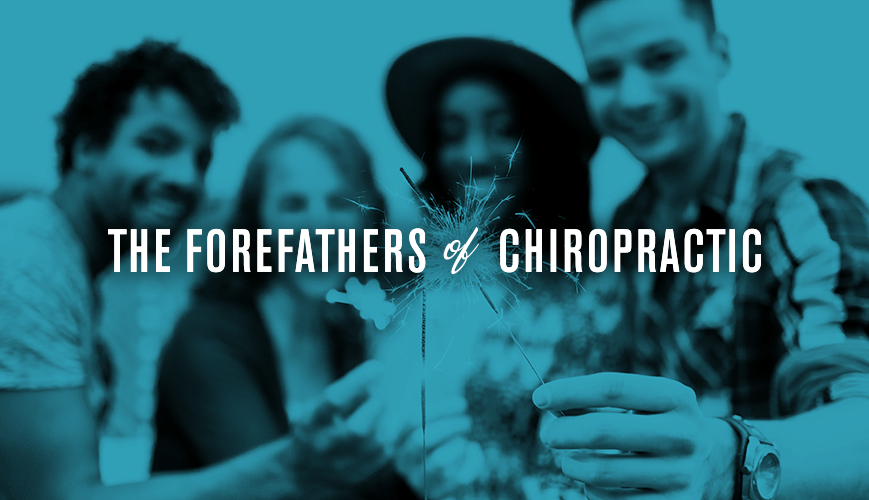 The Fourth of July is right around the corner. I always love this holiday, not just because of the parades and fireworks but because it’s a reminder of just how lucky we are to live in a country that affords us the rights we have. Sure, it’s not perfect -- but it’s home.

This got me thinking about another way in which we’ve been able to take control of our own destinies -- through the use of chiropractic. Chiropractic may be seen as an “alternative” health care option, but it’s moving more and more into the mainstream as people discover all the wonderful things it has to offer. Who are the people that one day thought to themselves, “Hmm, I bet if the spine is aligned then the whole body can be healthy? I wonder what will happen if I push … right … here!” It’s a thought that is definitely outside the box, and I would guess these men (and women!) are in the same boat as the person who first thought to reach into a beehive to retrieve honey -- definitely not a thought that would occur to most people!

So, here’s what I have been able to find out about the intrepid founders of chiropractic, including the nameless and faceless women whom you have to thank not only for your spinal health but your overall health!

If you were to pick a date to get an adjustment and set off some fireworks in honor of the founding of chiropractic, September 18 would be your day. It is widely recognized as the day in 1895 that Daniel David Palmer adjusted the cervical vertebrae of a man name Harvey Lillard who was deaf in Davenport, Iowa. The man regained his hearing and voila! Chiropractic was born.

So, I guess Dr. Daniel David Palmer is kind of a like the George Washington of chiropractic!

Bonesetting may sound like the title of a Stephen King novel, but it’s actually a profession that contributed to the practice known as chiropractic today.

So, what’s a bonesetter? Throughout the 19th century, you had all kinds of healthcare practitioners. Academically trained physicians believed there were issues they were too educated and high class to treat, which is why there were midwives, barber-surgeons, tooth-pullers, and bonesetters.

The men and women who were bonesetters set people’s bones when they were broken, but they also treated conditions that were caused by having a “joint out” -- something that would eventually be known as a subluxation, which is a fancy word for joint dysfunction or misalignment of the spine. The bonesetters treated these conditions by putting the bone back in place -- an adjustment! However, it was perhaps just a bit rougher than all of us are used to.

Dr. Daniel David Palmer was inspired by the tradition of bonesetting, but he, along with his son, Dr. B.J Palmer, developed the science and art and called it chiropractic -- from the Greek word that means “done by hand.”

The Theory of Magnetic Healing

Another important practice that was a building block of chiropractic is magnetic healing. A man named Anton Mesmer did a lot of research in the 18th century on the curative impact of magnetic healing. It eventually became a practice in which people recognized the flow of energy in the body and how it contributed to a person’s overall health. From the magnetic healer’s perspective, illness was an obstruction of this energy.

Dr. Daniel David Palmer was a practitioner of magnetic healing but he called it “innate intelligence” and believed subluxations impeded this flow of energy in the nervous system and caused illness. If this sounds familiar, it should! Modern chiropractic recognizes the balance and flow of energy throughout the body and how it contributes to your health and wellness as taught by Dr. Palmer.

We here at The Joint hope you all have a happy and safe Fourth of July, and after your festivities, be sure to come see us in order to make sure you’re set straight!