Rogue One and the Force of the Intergalactic Chiropractor 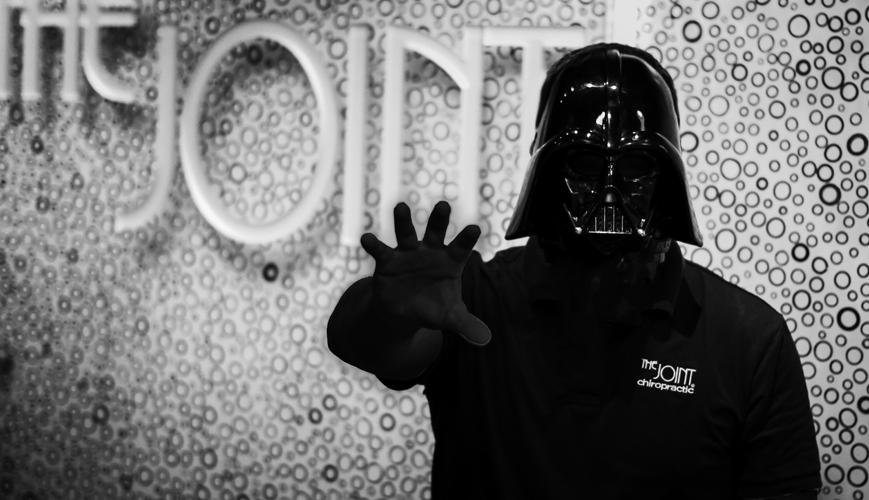 I couldn’t wait for the release of the new Star Wars movie Rogue One. In my own defense as a Star Wars nerd, I left my Boba Fett costume at home and decided to see this movie inconspicuously as soon as it opened. You know, at an IMAX theater at midnight amidst my people.

One thing that sunk in as I watched one of the greatest movies in the history of film was just how in tune everyone has to be with their surroundings, their compatriots, and themselves in the Star Wars universe. I mean, think about it: Use of the force, death-defying journeys across star systems, stealing plans from really bad guys that could potentially save the entire universe from the Galactic Empire -- face it, that’s just not accomplished without some major support behind the scenes. Surely, the rebels have a chiropractor on their crew, possibly the well-respected Kyro Giatros (five stars on Scarif Yelp). And because this is The Joint Chiropractic, here’s exactly how that heroic yet unnamed intergalactic chiropractor probably helped the rebels.

Cassian Andor is one bad cat. I mean, the guy is coolness personified. He’s able to deal with stress and pressure with command and respect, and seemingly without breaking a sweat. With the services of his intergalactic chiropractor back at the rebel base Yavin, he is properly aligned. That means his body is able to deal with stress better and recover more quickly. Spying for the rebellion isn’t easy! I’m sure his tagline, “Make 10 men feel like a hundred” was something he got from his chiropractor.

Saw has been around the block. Heck, all the way back in the Clone War days he was instrumental in the formation of the Rebel Alliance. You don’t get through all that fighting for what you believe in without some aches and pains -- namely, back pain. I’m sure his intergalactic chiropractor helped him deal with the inevitable pain of thousands of tiny micro traumas over the course of his life from all that rebel action. Sure, Saw’s tactics may have been extreme, but there’s no doubt he was able to be victorious in the face of so many foes by virtue of optimal spinal health. You can’t pull off that mission to steal plans to the Death Star without it!

Chirrut Imwe is blind. Blind! And still is a formidable warrior. He is very in tune with the force, and I can only assume that part of that is due to the fact he is free of subluxations or joint dysfunctions, as well as nerve interference, which allowed that energy to flow freely through his body. Not to mention that those fighting techniques with his quarterstaff would not have been possible without the full range of motion of his joints, something his intergalactic chiropractor definitely had an important role in helping him attain.

Look, I know there’s no chiropractor featured in Rogue One, but so many things point to the use of chiropractic care in the Star Wars universe that you just can’t ignore it. I know if I was preparing to throw down with the Galactic Empire, my chiropractor would be one of my first stops on the way to battle! When saving the universe, good rebels don’t take chances.