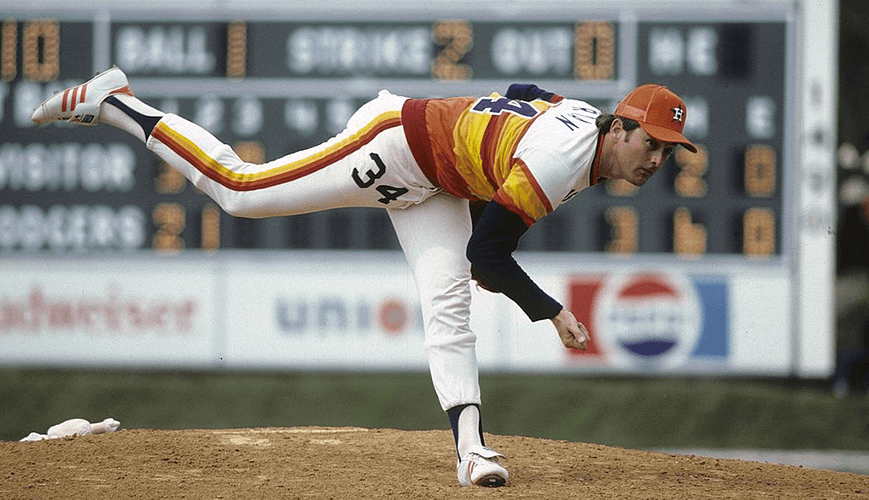 Nolan Ryan was 44 years old when he pitched his seventh no-hitter. He was 46 when he threw down with Robin Ventura in baseball’s most memorable baseball brawl. At the time, the Ryan Express was an inspirational face for aging Americans who had already toed the rubber of middle age.

Nolan Ryan turns 70 years old on Jan. 31. Once regarded as a “senior citizen” by baseball standards, he is now a senior citizen by all accounts, an icon whose career can still serve as an example for Baby Boomers and Gen-Xers who are well into middle age. He was, and remains, the stuff of legend.

In his career, Ryan struck out a record 5,714 batters. In addition to his seven no-hitters, he had 12 one-hitters (and 18 two-hitters) during his career. Even to a layman those are some incredibly impressive numbers. It’s a good thing he wasn’t considered a very good fielder because it’s incredibly easy to be jealous of people who excel at everything.

I decided to push my pettiness aside and take a look at Nolan Ryan’s life, and as it turns out his success wasn’t something that was guaranteed when he started out with the New York Mets in 1966 (LBJ was the president back then). He worked very hard, and he worked out very hard, to become the baseball legend he is. Early on in his career, he nearly threw in the towel out of frustration. He knew he had a gift, but he felt he wasn’t having the success he should in order to do his gift justice.

So, in honor of Nolan Ryan’s 70th birthday, here’s how he eventually found success and how you might be able to learn a little something about your own struggles through his. Maybe we can all find ways to be a more like Nolan Ryan!

What Was the Problem?

Nolan Ryan began in the big leagues in the days before sports medicine was even a thing, let alone at the level of science it is today. The best anyone could offer to help improve their game was a keen and trained eye to look at a pitch or a swing of the bat. People didn’t know much about body mechanics or proper form. So, when Ryan began with the New York Mets in 1968 (he pitched a few innings in 1966), he was frustrated. Here he was -- a guy who could throw a baseball (and had been able to since Little League) with some serious juice behind it, but didn’t know how to begin honing his natural talents and be the pitcher he knew he could be. He was frustrated and thought seriously of quitting. Of course, he didn’t. And now he stands alongside the other legends in Cooperstown -- all because he didn’t give up, he knew what he was capable of doing, and he worked toward it.

The Mental Side of the Game

When Ryan was traded to the California Angels in 1971, things started to click for him. He had a new environment and a pitching coach to help keep his form in check, and he realized something really important: What he needed to do to live up to his potential. When you get to the level of the major leagues, there’s not a lot of difference in physical ability. So, what separates one incredibly talented person from other incredibly talented people? It’s the mental part, the willingness to commit to hard work to be your best both mentally and physically.

Ryan had a professional baseball career that spanned 27 years. No one has even come close to playing at his level for that long. That can be attributed to his dedication to conditioning and training. His workout routine is the stuff of legend. And in an era (the 1990s) that included doping scandals and chemical enhancement, it’s truly an accomplishment to be so incredibly successful through plain old hard work.

What You Can Learn from the Legend of Nolan Ryan

For 23 years of his 27-year career, the remarkable Ryan hit the weight room religiously. As the ‘70s dawned, it had previously been thought that weightlifting was just a way to get beefed up, but it’s now known that working different areas of your body with weights helps your balance and flexibility. Strength training also helps to build muscle, muscles that help to support your joints and keep them healthy, as well as reduce body fat. In Ryan’s case, he found that the more he lifted, the faster his arm recovered between starts. His conditioning program helped contribute to his stamina, which enabled him to maintain his pitching form and the velocity on his fastball in the later innings. He was an iron man known for going the distance. Tom Glavine never pitched more than 247 innings, John Smoltz 257 and Randy Johnson 271, and all are in the Hall of Fame; Ryan pitched 284 innings or more five times, including 326 in 1974 (when he struck out a record 383 batters) and 332 in 1975. He didn’t get fatigued as easily, which often leads to sloppy mechanics.

Even if you don’t aspire to the level of Nolan Ryan’s greatness, I think it’s safe to say that hard work, physical stamina, and dedication to your health regimen is something that will only serve you well. It can help you to be healthier and happier too.

How can you and I be like Nolan Ryan? It starts with a solid foundation and allowing your body to achieve optimal health. Chiropractic care is a good first step. Clearing the way for your nervous system to provide maximum function, and your spine maximum range of motion, will serve you well physically and mentally. You may not pitch a no-hitter in your 40s, or wail on a dude 20 years younger, but you can make the best of your life by being healthy. Chiropractic care is a home run for everyone!

If you’re looking to take your athletic performance to the next level, or simply improve your health overall, talk it over with your chiropractor at The Joint Chiropractic. And perhaps you can pay homage to Nolan Ryan by hitting the gym or getting a spinal adjustment so you can stand as tall as Texas’ favorite son.