Risky Buzziness: Protecting Our Pollinators is the Bee’s Knees 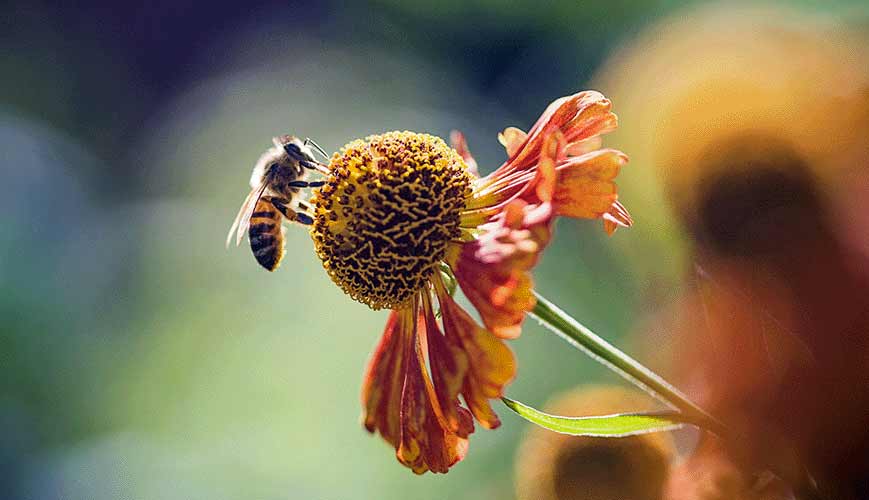 Though you’ve probably never eaten a pine tree, many parts are edible. And like most of our food, eating farm-to-table -- with as little human intervention as possible -- is the healthiest version for consumption. The domino effect we’ve created in the case of our pollinators is a good example.

If you dislike honey and don’t spend a lot of time outdoors, you may not realize you still have a relationship with bees. One out of every three mouthfuls of food you consume has been affected by honey bees, says an article in DenGarden by Catherine Giordano. Bees and other insects, such as butterflies, pollinate crops, but many are reliant on honey bees alone for pollination, including:

Though they are not North American natives, farmers have cultivated a relationship with honey bees, so we are now dependent on them, says an article in the Bangor Daily News. They not only pollinate our crops to produce one-third of our food supply, they keep plants alive through cross-pollination.

But the numbers of colonies are dropping in the United States at rates between 29 and 50 percent each year.

More than three-fourths of the 2.75 million honey bee colonies in this country are commercial entities, and those bees have to endure a diet of limited variety, pesticides, and being trucked thousands of miles. Another problem is their close proximity, which creates a buildup of parasites.

The good news is, individuals can help turn the tide.

“Many (commercial beekeepers) misguidedly assume they can select for tougher bees by not treating, and they just end up with dead bees,” the article says. “It would be far better for the bees if there were hundreds of thousands of new backyard beekeepers with one or two hives than having dozens more beekeepers with 10,000 hives.”

It’s one of those events that could have a huge impact on our lives, even to the extent of survival.

“Colony Collapse Disorder” is a term created in 2006 and defined as the disappearance of bees, Giordano explains, in which a queen is left behind with food and an unhatched brood. Many beekeepers are forced out of business, reportedly losing about 30 percent of their colonies a year, both in the U.S. and in Europe. And queen bees aren’t living the usual two to three years. They’ve been dying abruptly and inexplicably, surviving only about a half-year total.

There may be several causes, Giordano theorizes. It could be that pesticides are killing them or possibly weakening them so they can’t survive an attack of mites. Also, confusion among bees affects their ability to produce because they communicate with each other to establish direction from the hive to nectar and back again.

Giordano lists some possible factors affecting the lives of bees, including:

It’s hard to believe that the fate of mankind could hinge on the ability of insects to “get it out of their system,” but man-made poisons are destroying our food sources. Contact or surface insecticides are on the plant short-term, but systemic pesticides such as neonicotinoids are absorbed by plants. They infect even the seeds, furthering the work of the poison indefinitely. And because systemic insecticides affect the pollen of the plants, bees bring it back to hives and it decimates their populations.

An article in The Guardian warns that the world’s food supply is at risk. Nicotine-based systemic insecticides were developed and first used commercially in the mid-1990s. Scientists compare the devastation of systemic insecticides to the impact of DDT, which was outed by Rachel Carson in 1962 in her famous book Silent Spring.

“The evidence is very clear. We are witnessing a threat to the productivity of our natural and farmed environment equivalent to that posed by organophosphates or DDT,” said Jean-Marc Bonmatin, of the National Centre for Scientific Research (CNRS) in France, which conducted a four-year assessment. “Far from protecting food production, the use of neonicotinoid insecticides is threatening the very infrastructure which enables it.”

The health and wellness of mankind may, ultimately, depend on making important decisions on how we protect our crops.

While many products enhance our lives -- and we can count pesticides among them -- we need to be conscious of getting back to basics wherever and whenever we can. For instance, many life-saving vaccinations and medicines have promoted longer, healthier lives, but abuse is epidemic; plus, we’ve become reliant on them as go-to wellness options.

Analogous to a field of clover abuzz with honeybee activity, consider the human form. From treating chronic pain to maintaining general physical health, chiropractic care is a drug-free option with maximum benefits. The nerves that exit the spinal column are connected to your spinal cord, part of the central nervous system, which needs ongoing assessment by an expert. When spinal joint restrictions occur, these nerves may get irritated and affect specific muscles, tissues or organs in the body That’s why it’s a good idea to maintain a regular routine of chiropractic visits to avoid unnecessary illness and painful maladies. We need to protect the bees’ food source the same way we need to protect the spine.

And talk about getting back to basics, the practice of manipulative therapies dates back thousands of years. Chiropractic treatment essentially developed in many parts of the world simultaneously. Even Hippocrates, in the fifth century B.C., discussed spinal manipulative techniques, according to an article in Journal of Manual and Manipulative Therapy.

“Manipulation can trace its origins from parallel developments in many parts of the world where it was used to treat a variety of musculoskeletal conditions, including spinal disorders,” the journal says. “It is acknowledged that spinal manipulation is and was widely (practiced) in many cultures and often in remote world communities.”

Our global connection makes it imperative we do what we can as individuals to promote wellness, and even survival in some cases. You can choose drug-free options for your health, just like you can keep a hive of your own, sponsor a hive, or simply plant wildflowers free of pesticides.

When you remain aware, you know what you need to do. Because we all know it’s not nice to fool with Mother Nature, and protecting our food source is the bee’s knees.

Workplace and Home Base: How Healthy Is Competition?