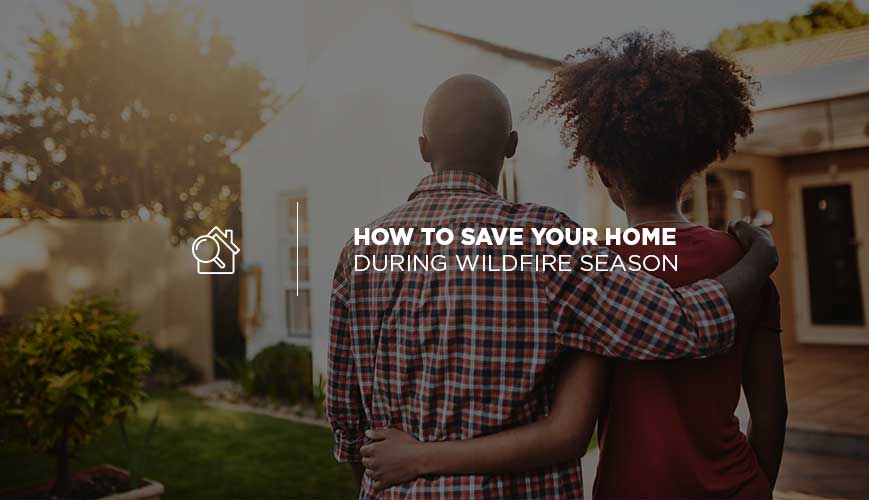 In some parts of the country the term “fire season” is becoming a misnomer because wildfires are breaking out earlier and winding down later in the year with increasingly more power and destruction. Last year was the worst ever recorded when more than 58,000 wildfires scorched nearly 10,275,000 acres in the United States, according to an article on EarthSky.org.

Residents on the West Coast have developed a tremendous amount of gratitude for first responders and the hard work of fighting wildfires, but authorities are also sounding the alarm about the need for prevention. Residents in fire areas can become agents of change when they follow guidelines to minimize the spread of wildfires.

The time to consider the threat of fire damage is when you begin the process of settling down. If you’re currently house shopping, check the community’s history of wildfires and the evacuation practices of the neighborhood or homeowners’ association where you plan to move.

If you purchase a brand new home, chances are there’s been a rigorous adherence to fire regulations, but with older structures you may consider some changes before moving in. An online article by This Old House offers tips to make your home resistant to wildfires through various means whether you’re a new resident or a longtime homeowner.

In 2005 the Institute for Business and Home Safety built the first house dubbed “Fortified … for Safer Living” following optimum guidelines in its design, construction, and landscaping to maximize its resistance to natural disasters. For approximately four hours of fire resistance, they created a shell using insulated concrete forms, or ICFs, which are blocks of polystyrene. While these kinds of materials were previously reserved for business construction, they became more commonplace for residential projects to increase safety for homeowners.

There are plenty of noncombustible materials you can choose for remodeling or a room addition to decrease the chance that embers reach flammable objects and catch the rest of your house on fire.

A simple wood roof may fit your fantasy of a charming cottage, but it will increase the chance of losing your home in a house fire. You need to choose styles made of fire-resistant materials such as roofing with a Class A rating that will withstand fire for two hours or longer. They include metal, concrete, and various tile construction.

The most flame-resistant siding is made of stucco, block, brick and stone. If you like the look and style of wood siding, choose fiber cement clapboards instead of flammable wood.

From vegetation to popular features around the outside, you need to create a buffer between combustible materials and your home. Refrain from using or remove the following to reduce the likelihood that flying embers could catch fire to your house:

Fire department officials continually campaign for greater compliance by homeowners in creating defensible space to minimize the flammability of their structures. Your home has a greater chance of survival if shrubs, trees, and grasses are planted farther away from the house.

The California Department of Forestry and Fire Protection, or CAL FIRE, suggests an “ember-resistant zone” which is deemed the most important factor in reducing the spread of fire to your house. Move anything combustible to at least 5 feet from the exterior walls of your home including firewood, plants, wood furniture, and fencing. Replace foliage with hardscape using gravel or concrete. Clear debris from gutters and rooftop areas. For foliage outside of the 5-foot minimum, choose plants that are low to the ground, and trim trees. Remove branches that come within 10 feet of your chimney.

The Role of Fire Insurance

Both homeowners and insurers benefit when residents take the time to fireproof their residences. An article in the California News Times points out the shifting dance between homeowners and insurance companies in a landscape where the facts aren’t clear.

Unfortunately, there’s little research on which to base risk-mitigation values which insurers could use to motivate homeowners to clear brush and change out roofing, for instance. According to the Insurance Institute for Business & Home Safety, there’s a dearth of research because, until about four years ago, insurance companies didn’t record their massive losses from fire payouts.

Due to the devastating wildfires, the State of California approved $1 billion in premium rate hikes between 2017 and 2020. Eight insurers, which account for 13 percent of California’s insurance market, have begun offering discounts to homeowners making the effort to reduce the risk of fire.

“The entire California risk map has changed forever. The only way to deal with it is to make it harder for people to burn their homes and to be rewarded by keeping their insurance affordable,” says Amy Back, secretary general of United Policyholders, a consumer advocacy group. “No one wants to lose their home, and insurance companies certainly hate it when people claim thousands of dollars.”

An article by Value Penguin discusses the possibility that people in high-risk areas augment the fire coverage included in their homeowners insurance.

While most standard policies cover the loss of the structure and damage to your property, people in high-risk areas may want to add “dwelling fire” coverage. It usually costs less than your homeowners insurance, but it doesn’t cover some of the perils included in the umbrella policy. It does, however, include coverage of smoke, fire, explosions, and sometimes wind.

As things heat up -- the thermometer and the risk of fires -- residents are wise to consider the ways they can reduce their chance of losing it all in a fire. While northern states insulate their water lines and weather-strip doors to prepare for winter storms, getting ready for fire season may require more costly preparations including construction or even more insurance.

In areas where fire season is year-round, it may be worth the expense.