Caffeine and Health: A Cup Half Full or Half Empty? 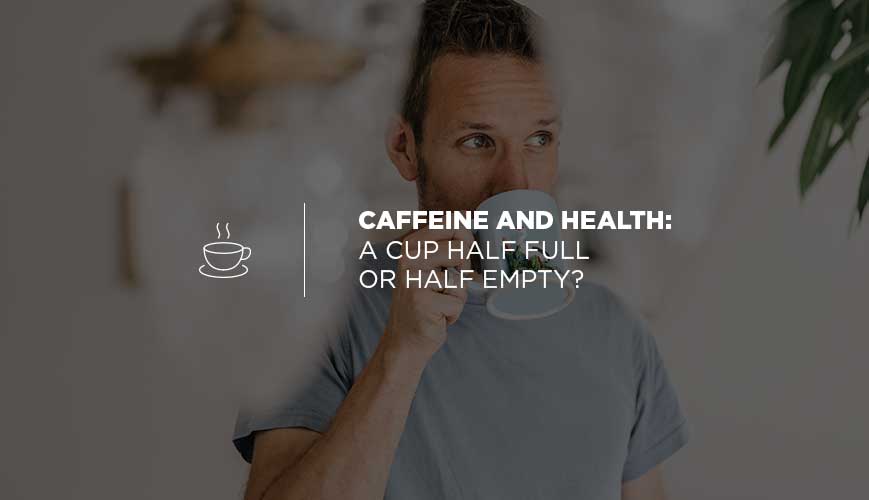 With its perky effects and a reputation that’s ground deeply into modern American culture, coffee leads the way in getting caffeine to our lips. There are other favorites -- sodas, tea and energy drinks -- that can all cut both ways. You obtain some benefits if enjoyed in moderation, but you can undermine a balanced wellness program if you indulge yourself too much.

Though it provides no nutritional value, caffeine certainly makes its presence known to your body, according to an article by Stanford Health Care. Acting as a stimulant for your central nervous system, caffeine narrows the blood vessels surrounding your brain and selectively blocks the activity of adenosine, a substance in the brain that quiets electrical activity and regulates sleep and movement.

There are positive and negative effects of caffeine on the body, says an article on the Vascular Health Clinics website. A product found in kola nuts, cocoa, coffee beans, guarana berries and tea leaves, caffeine can improve concentration and make you feel more awake. It constricts the blood vessels surrounding your brain by more than 25 percent and raises your heart rate, sometimes leading to harmful heart palpitations.

According to an article by Science Direct, caffeine consumption has been studied nearly as much as any other product in the food industry. Of the 85 percent of Americans who consume at least one caffeinated beverage per day, 96 percent comes from coffee, tea, or soft drinks.

Researchers have studied the effects of caffeine consumption on the occupational performance of professionals who provide critical services such as first responders and members of the military. The data shows that regulated levels of caffeine can improve physical and cognitive function leading to greater productivity in some cases.

Both rested and sleep-deprived participants with doses of caffeine ranging from 12.5 to 400 mg showed an enhanced reaction time. They concluded that for jobs requiring a high level of vigilance, approximately 200 mg of caffeine in your system improves your performance for a few hours. People whose work requires sustained vigilance for tedious or boring tasks are more impacted by caffeine in their system when they’re rested than if they’re sleep-deprived. Auditory vigilance testing shows that 32 to 256 mg of caffeine can increase the ability of well-rested individuals to detect signal tones.

In a “real world” study of Air Force pilots performing a simulated reconnaissance mission, results showed that by administering a 200 mg dose of caffeine and a second dose four hours later, pilots were able to sustain cognitive performance, including vigilance, for more than nine hours.

Though more research is necessary, caffeine consumption is linked to other benefits including:

Unlike substances such as nicotine and opioids, becoming a heavy drinker of caffeine products rarely carries the stigma of addiction.

When your use of caffeine goes from enjoyment to necessity, it’s worth some self-reflection, according to the Addiction Center. Caffeine dependency develops quickly because the chemical changes that occur in your brain are sustained during beverage consumption. Like other addictions such as alcohol, your tolerance for caffeine rises, which means you need to raise the volume to feel more awake and maintain alertness.

The reason caffeine gets a pass while other substances are highly regulated or outlawed has to do with the areas of the brain that are affected. When you consume caffeine you get a dopamine surge, but the use of cocaine or amphetamines acutely stimulates the part of the brain affecting reward and motivation. This difference keeps caffeine addiction from being considered a substance use disorder by the American Psychiatric Association. The organization does acknowledge that, like drug addiction, drinkers build a dependence on caffeine and an abrupt cessation of caffeine induces withdrawal symptoms.

For healthy adults, a daily intake of caffeine that doesn’t exceed 400 mg -- approximately four cups of coffee or 10 cans of coke -- is relatively safe, according to an article by the Mayo Clinic. Taking two "energy shot" drinks per day falls within those guidelines as well, but keep in mind you may not be aware of the caffeine content in your favorite drinks.

Watch for signs you may need to cut back, including:

Anyone who relies on a cup of coffee in the morning can already describe its benefits but waking up to the possibility you need to downgrade that venti to a tall size might be a good idea. Whether it’s drip, Keurig, or comes straight from a can, the percolating effects of caffeine can be helpful or harmful, depending on how much you consume.