There Are Many Benefits to Exposing Your Baby to Music 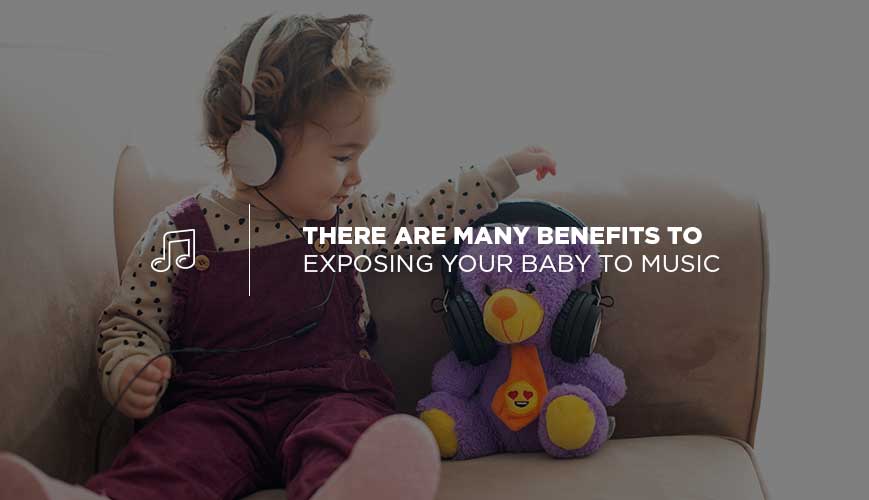 It’s a universal reaction -- new parents sing a happier tune when their baby is a good sleeper. Although every newborn is different, many respond to lullabies to fall asleep; however, the benefits of exposure to various melodies do not end at infancy. The sound of music contributes to brain development for children of all ages.

Not only do lullabies help your baby sleep, you can sing or play them in any language, according to an article by The Harvard Gazette. A study of American infants by Harvard’s Music Lab shows that lullabies cause babies to relax regardless of the familiarity with the words or music.

By studying their pupil dilation, heart rate, frequency of blinking, and rate of excitement through electrodermal activity, scientists measured the babies’ level of agitation and relaxation while exposed to music. Using songs in Scottish Gaelic, Hopi, and many other languages, researchers monitored baby reactions to styles ranging from dance tunes to love songs and found that lullabies were the most calming type of melody.

Scientists continue to study the acoustic effects of lullabies in various cultures, including whether they induce sleep because the music dovetails with other factors such as the environment created for bedtime. With further data about the evolutionary function of musical sounds, they can enhance the forms of music they provide for new parents to maximize its effectiveness.

During their waking hours, parents who hope their infants have a healthy rate of development can get a little help from their streaming service. Bringing up babies with music improves their speech and boosts other cognitive skills as well, according to research at the University of Washington Institute for Learning & Brain Sciences.

Engaging 39 babies in a series of 15-minute play sessions, researchers added music to the experience for 19 of the participants. They played triple-meter songs, such as waltzes, while parents tapped out the beats to the music. A few days after the last play session, each of the families returned to the lab and the babies were placed under a brain scanner.

While playing recordings of music and speech with intermittent disruptions, they used magnetoencephalography, or MEG, to track the location and timing of the babies’ brain activity. The brains of those in the music group had stronger reactions to the disruptions, which suggests they were better able to detect patterns in sounds, a skill that makes learning languages easier.

“Infants experience a complex world in which sounds, lights and sensations vary constantly,” says Patricia Kuhl, co-author of the study and co-director of I-LABS. “The baby’s job is to recognize the patterns of activity and predict what’s going to happen next. Pattern perception is an important cognitive skill and improving that ability early may have long-lasting effects on learning.”

An article on the Unicef website says there is a benefit to listening to music, but it is greater when children produce music themselves. In addition to the math calculation involved in playing an instrument, the fine motor skills needed to hold and squeeze an object activate other parts of the brain that contribute to developing the bridge between the two hemispheres.

It improves the pathways for messaging and translates into real world benefits, says Graham Welsh, a British neuroscientist who studies the impact of music on the brain.

By implementing the evidence regarding early childhood development, research shows that music is able to impact:

“Music can unlock a child’s path for learning in a way that nothing else might. It builds children’s confidence and language skills and can improve their math scores when they get to school,” Welsh says.

An article on the Bright Horizons website says that playing an instrument can accelerate the acquisition of math skills and improve test scores, but exposure to music in nearly any form contributes to all areas of child development. Young children gain skills for school readiness, including social-emotional development and memory enhancement. Dancing helps children gain motor skills and provides a platform for self-expression.

New parents typically dream of a sleeping baby who grows to become a healthy child filled with potential. Music at every stage of development seems to enhance that opportunity with the best of both worlds -- jump-starting the learning process as Baby gets older, but in the meantime letting the parents hit the snooze alarm.