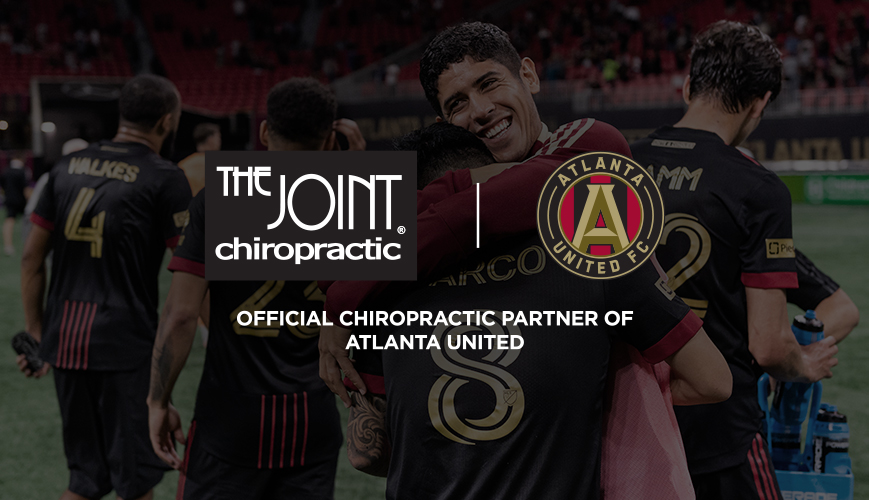 “We are honored to be named the Official Chiropractic Partner for Atlanta United, a club that has set multiple league records since its founding,” said Peter D. Holt, President and CEO of The Joint Corp. “This agreement allows The Joint to continue to champion the efficacy of chiropractic and partner with Atlanta United in supporting the fans and community in Atlanta.”

According to the American Chiropractic Association, chiropractic care has gained wide use among many sports teams across the country for giving athletes a competitive edge. In fact, 77 percent of athletic trainers have referred players to a chiropractor and 100 percent of trainers report that some players seek chiropractic services on their own, without a referral.

“We are excited to partner with The Joint Chiropractic, the nation’s largest provider in chiropractic care with 46 locations in the Atlanta area,” said Georgia O’Donoghue, Atlanta United’s Vice President of Business Operations. “The Joint’s reputation for improving quality of life by providing patients convenient and affordable care made them a natural fit to become the Official Chiropractic Partner of Atlanta United.”

About The Joint Chiropractic

The Joint Corp. revolutionized access to chiropractic care when it introduced its retail healthcare business model in 2010. Today, it is the nation’s largest operator, manager and franchisor of chiropractic clinics through The Joint Chiropractic network. The company is making quality care convenient and affordable, while eliminating the need for insurance, for millions of patients seeking pain relief and ongoing wellness. With more than 700 locations nationwide and over eight million patient visits annually, The Joint Chiropractic is a key leader in the chiropractic industry. Ranked number one on Forbes’2022 America's Best Small Companies list, number three on Fortune’s 100 Fastest-Growing Companies list and consistently named to Franchise Times “Top 400+ Franchises” and Entrepreneur’s “Franchise 500®” lists, The Joint Chiropractic is an innovative force, where healthcare meets retail. For more information or to find one of chiropractors near you, visit www.thejoint.com.

Leadership claim based on network size. The information, including but not limited to, text, graphics, images and other material contained on this page are for informational purposes only. The purpose of this post is to promote broad consumer understanding and knowledge of various health topics, including but not limited to the benefits of chiropractic care, exercise and nutrition. It is not intended to provide or be a substitute for professional medical advice, diagnosis or treatment. Always seek the advice of your chiropractor, physician or other qualified health care provider with any questions you may have regarding a medical condition or treatment and before undertaking a new health care regimen, and never disregard professional medical advice or delay in seeking it because of something you have read on this page.

For media and press inquiries, please contact our PR department at: press@thejoint.com.