Water Safety for Children and Teens: More Than a Stroke of Luck 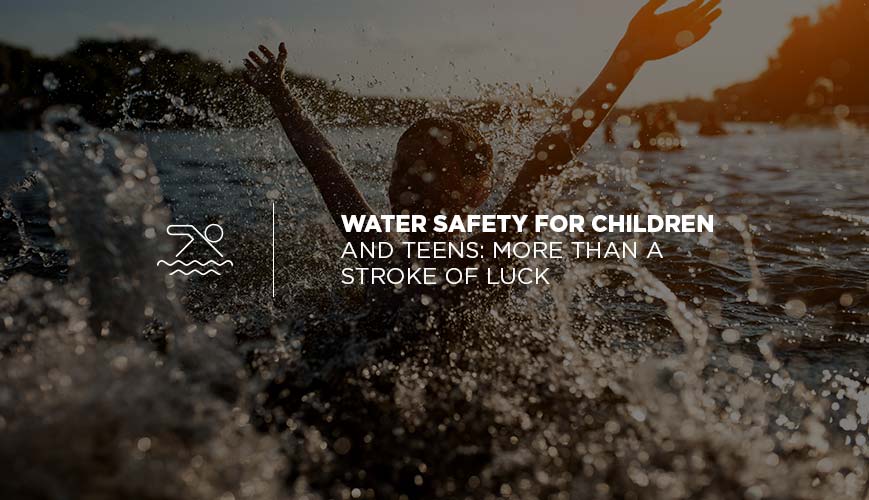 As people flock to lakes, rivers, beaches, and pools this summer, most of them will feel the cool refreshment of their recreational choices. Keep in mind that when you bring children around water sources of any size, you’re in deep with duties that involve proper supervision and adequate safety measures to reduce the chance of drowning.

Historically, most drowning deaths in the early 1900s were women and children, according to an article on the UMass Boston Archives & Public History website. Men were taught to swim because it was viewed as a masculine sport while cultural norms dictating modesty also limited the opportunity for females. A campaign encouraging people to learn to swim was launched after a tragedy in 1904 on the East River in New York City. Approximately 1,000 women drowned during a fire on a steamboat though many were in shallow water near the shore.

A graph showing the rate of drowning deaths in the United States on Statista.com reveals a fairly consistent reduction in number in the last century. Beginning with 11.1 deaths per population of 100,000 in 1905, the rate of drowning drops to 5.7 by 1920 and has occasional rises in number until it hits a historic low of 1.1 in 2003. The most recent statistic shows 1.3 deaths by drowning per 100,000 Americans in 2020.

On average, 10 individuals in America die from unintentional drowning every day and 20 percent of them are kids under 14 years old, according to the American Red Cross, which has been teaching water safety courses for more than a century. Every youngster in the United States does not have the same odds of drowning, however. There are variables that determine the risks and type of drowning involved.

Age - Babies less than a year old are most likely to drown at home. Approximately 87 percent of drowning incidents involving children younger than 5 occur in hot tubs or swimming pools. The second-highest rate of drowning for young children occurs in bathtubs.

Other sites where drowning can occur include:

For kids ages 5 to 17, drowning is most common in natural water sources such as lakes or ponds.

Racial Factors - Children with fewer swimming skills are more likely to drown, but their level of ability varies according to race. While 40 percent of Caucasian kids lack the level of skills necessary for swimming safely, data shows that 45 percent of Hispanic/Latino children and 64 percent of African American kids are not competent swimmers. Among children 5 to 19, African American kids are 5.5 times more likely to drown than Caucasians.

Physical Disabilities - Although birth defects cause more deaths in children under the age of 5, drowning is the second-leading cause. The risk of fatal and nonfatal drowning for children with autism spectrum disorder is 160 times higher than it is for others, and drowning is the leading cause of death for both kids and adults with autism.

An article in KidsHealth.com offers suggestions to maximize water safety this summer.

Be hands-on with infants - From that first bath to sitting up in the tub, your little ones cannot be left unattended. Sturdy safety tubs and bath rings can give you a false sense of security because children can slip under the water and drown accidentally in a matter of seconds. Applying anti-skid strips on the bottom of the tub is an added measure to prevent falls, and covering the spout with a rubber cover will limit injuries to the head if they tip over.

Always provide supervision - Regardless of the size of the container -- whether it’s the ocean or a kiddie pool in the backyard, swimmers of all ages need a spectator. At greatest risk are young kids who can drown in as little as two inches of water. Those with few or no swim skills need to be within an arm’s reach of an adult swimmer. Even kids with good swim skills should be watched in case of accidents, such as falling and hitting their heads.

Teach them to swim - Finding a good swim instructor should top the list for new parents. Children as young as a year old can begin developing competency in the water. A survival skills class will teach them to roll onto their backs and float, which reduces the risk of drowning in children ages 1 to 4.

The risk of drowning decreases after the toddler years but it increases when your child becomes an adolescent. Comparing various age groups, kids between 15 and 19 years of age have the second-highest risk of fatal drowning, says an article on HealthyChildren.org. The drowning risk for teenagers is high, in part because the area of the brain involved in decision-making is underdeveloped; they tend to believe they’re invincible and want to impress their peers, which can lead to dangerous actions, such as diving into shallow water or jumping into a swimming pool from the roof.

Teenagers should not be swimming alone or host friends without a parent or other responsible adult present. For many reasons they should not be consuming alcohol, but risk of injury is particularly high when substance use and waterplay are combined. Data shows that 30-70 percent of water deaths among teens in the United States involve alcohol use while swimming or boating.

Getting out of the heat feels good but the benefits are only worth the risks when adults remain vigilant. Even in shallow water, responsibilities run deep. Whether you host a pool party or take a sailboat out on the lake, when children are near the water you never throw caution to the wind.