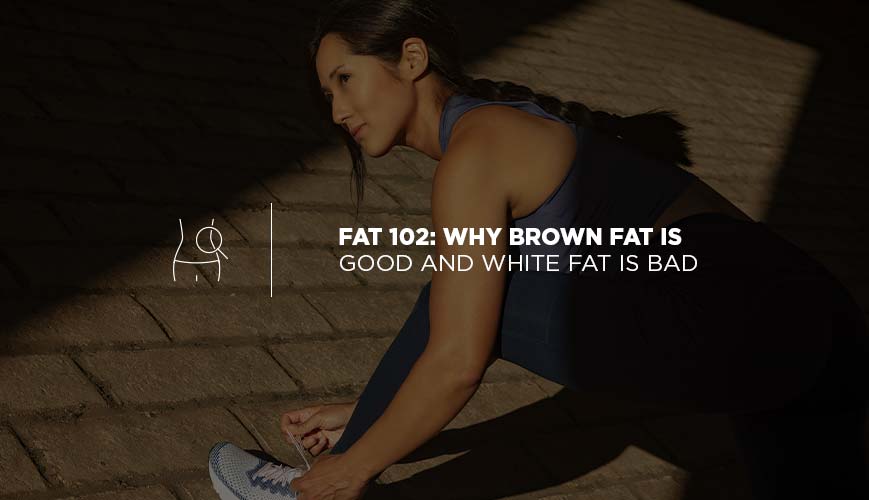 If your concept of fat is limited to memories of failed diets or what you find on a piece of barbecued meat, you may not know that fat comes in a variety of colors and serves specific functions. Even the leanest individuals have white, brown, and beige fat in their bodies and each type of tissue has a different job to do.

When we look in the mirror and see extra pounds, what we’re looking at is a buildup of white fat cells. It’s the type of fat stored just under your skin so it’s more noticeable than visceral fat, which envelopes your organs, or brown fat which is a healthier type of tissue found in parts of your upper body.

The University of Utah website has a transcript from a conversation with Claudio Villanueva, PhD, assistant professor in biochemistry and investigator at the Center for Diabetes and Metabolism, about the cellular dynamics of fat production. He explains the difference between white fat and brown fat and how they interact.

Anyone who’s counted calories is most familiar with white fat because it stores unused energy that gets reflected in weight gain as the cells get larger and increase in number. Brown adipose tissue is sometimes referred to as “good fat” and uses the lipids stored in your white fat cells to create heat energy for your body.

Beige fat cells have also been identified in mammals, according to the Harvard Medical School website. They are typically located in deposits just below the skin along the spine and collarbone. Like brown fat, they contain mitochondria that burn energy and generate heat. They have a light brown hue because of their iron content.

Villanueva and his team aim to harness the transformative process that turns the energy in fat from storage to expenditure as a way to make headway in reducing the current obesity epidemic. Their research may also contribute to diabetes prevention efforts; they’ve found that individuals with more brown adipose tissue are protected against diabetes. Beige fat cells consume both lipids and glucose and they begin to appear in white adipose tissue after prolonged periods of exposure to cold temperatures. Experiments with subjects in cold environments have shown improvements in their sugar levels.

In addition to treatments involving low temperatures, researchers have isolated molecules within fat cells that disrupt the thermogenic process, and by inhibiting them, they can enhance the production of beige and brown adipocytes.

An article on the National Institutes of Health website cites metabolic research by Dr. Shingo Kajimura at the University of California, San Francisco, validates the potential impact brown fat can have on reducing white fat levels.

Study participants with high levels of brown fat in their bloodstream have lower levels of branched chain amino acids, or BCAAs; the BCAAs are heightened in cases of obesity, insulin resistance, and type 2 diabetes. Further research needs to be done, but experts suggest that reducing BCAAs by increasing brown fat may be an effective treatment for these conditions.

How to Increase Brown Fat Production

Eat apples - According to a study at the University of Iowa, apple peels contain ursolic acid, which contributes to raising your levels of brown fat.

Don’t go on a crash diet - Neurons in your brain that tell you to stop eating when your body is full are also responsible for making fat turn brown, according to studies at the Yale School of Medicine. The process requires balance -- it’s hindered by both overeating and not consuming enough calories.

Spend time in cold temperatures - When you’re cold, you burn more fat and the impact can last for weeks, according to research published in the Journal of Clinical Investigation. Researchers found that when participants sat in a room set at 63 degrees Fahrenheit for two hours a day for a six-week period, they burned 108 calories more than they did in higher temperatures. After six weeks they burned an additional 289 calories in cold environments. Scientists conclude that exposure to cold stimulates a gene that boosts brown fat creation.

Get enough exercise - Most people would agree that one way to reduce noticeable body fat is through physical activity. Studies say it works because exercise releases the enzyme irisin, a catalyst in converting white fat into brown fat cells. A study involving men using exercise bikes showed a rise in brown fat production that continued to increase after 12 weeks of training.

Stimulate your melatonin - The hormone melatonin is better known as a contributor to sleep cycles, but it also stimulates beige fat production. Turn off the TV and avoid light from your computer or other devices, but get plenty of sunlight during the day. You can also eat food and spices that are rich in melatonin such as:

Though it has a negative connotation, fat is present in everyone’s body, and it serves an important purpose. White fat may be associated with rising numbers on your bathroom scale, but your brown fat cells aren’t couch potatoes -- they’re busy burning energy and keeping you warm while the image in your mirror doesn’t change at all.