Big and Little Lies: There’s a Benefit to Truthfulness 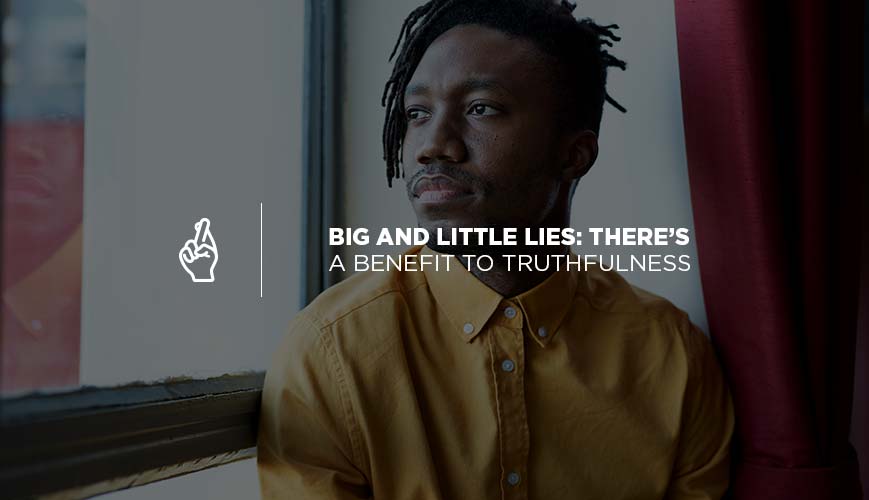 Studies show a link between truthfulness and better health -- and that’s no lie. If you’ve got a good poker face you may be able to build your bank account, but telling the truth can give you the upper hand where your mental and physical health are concerned.

Data shows that Americans tell an average of approximately 11 lies per week, according to the American Psychological Association. Finding reasons to lie is a universal experience, but most people sense there are advantages to being truthful.

Researchers at the University of Notre Dame conducted a “Science of Honesty” experiment with a group made up of college students and adults from the community. Half of the participants were told to stop lying, including minor fibs, for 10 weeks. The other half was a control group with no instructions regarding their efforts to tell the truth. Data was collected weekly when the subjects went to the lab for a polygraph test and interviews.

The men and women in the group instructed not to lie exhibited greater health benefits by speaking truthfully than control group members who reported the same number of situations where they told the truth instead of lying.

When members of the control group chose not to tell white lies on three occasions, they reported two fewer mental health issues and one less physical problem on average. Data shows the same outcome for major lies, according to the researchers.

“We found that the participants could purposefully and dramatically reduce their everyday lies, and that in turn was associated with significantly improved health,” says lead author Anita E. Kelly, PhD, professor of psychology at the University of Notre Dame.

An article in Scientific American claims that good liars have certain traits that make it easy for them to get away with deception. People whose lying is hard to detect tend to have a combination of the following characteristics.

They are manipulative - They speak without showing anxiety, dominating conversations while maintaining a state of relaxation.

They are expressive - Using passion, animation, and sometimes seduction, they create positive impressions among acquaintances.

They have acting skills - People with theatrical ability can imbue confidence in those who watch and listen to them.

They are attractive - It’s human nature to believe in the truthfulness of pretty people, while unattractive individuals are seen as less honest.

They are good speakers - The best liars use eloquent speech to be convincing and their responses are often long-winded.

They have good memories - By remembering what they’ve previously said, they keep their lies straight, which reduces obvious inconsistencies.

An article on Healthline.com defines pathological lying and describes its effects on others. Sometimes referred to as mythomania or pseudologia fantastica, a person’s dishonesty is pathological when it’s fueled by a psychological compulsion. Some pathological liars are diagnosed with sociopathy, or antisocial personality disorder. In some cases, the behavior is related to head trauma and the condition may be related to issues involving the central nervous system.

Although it’s challenging to create a clear definition, experts accept the following characteristics as defining a pathological liar:

Some typical examples of pathological lies include false claims on resumes and profiles, as well as dishonest accounts of achievements. Sometimes pathological liars claim an illness, particularly a life-threatening condition, to draw more sympathy. They also make up stories involving brushes with fame or famous individuals.

To Tell the Truth About Someone Who Lies

If you have people in your life who have trouble sticking to the truth, it’s important for your own safety and well-being to determine if they’re relatively harmless or an untrustworthy pathological liar. Characteristics of white lies include:

Some examples of typical white lies are:

When a person’s lies are less obviously motivated and their responses to your questions about the accuracy of their stories are vague, they may have a bigger problem. If clues lead you to believe that someone in your life has a psychological disorder, you can take some of the following steps to protect yourself:

If you’re the one telling lies, keep in mind the relief you get when you don’t have to be anxious about keeping your stories straight. You also gain the mental health boost of building trust in your relationships. Truth be told, a pattern of lying may help you beat the competition for a time, but in the game of life, it’s not a game you can win.