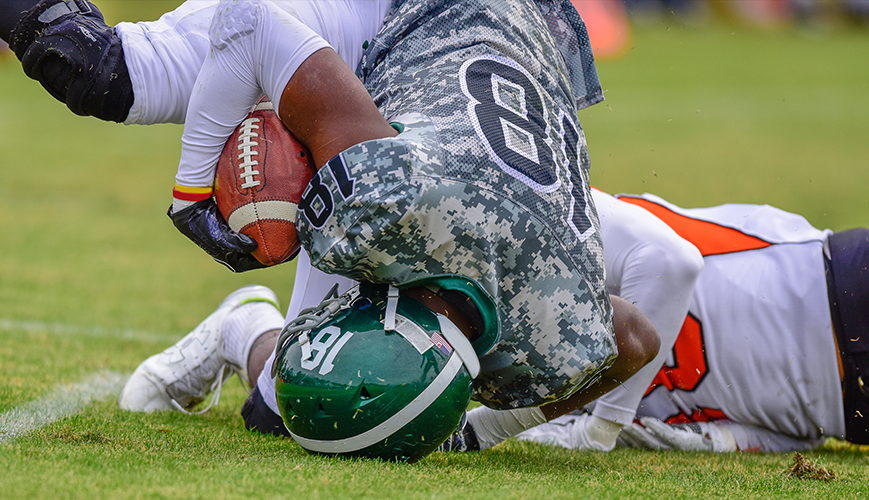 It’s back to school time! For many people, this also marks the kickoff of high school football season. From Maine to California, you can find a game on any given Friday night.

In large cities and small towns, high school football is a big deal in the local community, often seen as something that can set the tone for the entire school year. But prep sports are also really important for the young athletes involved, whether it’s the bruising action of football or the relative solitude of the cross country runner; it teaches valuable skills they can use over the course of their entire lives such as team building, communication, and good sportsmanship. It also gets them out and gets them moving which, with a childhood obesity epidemic sweeping the country, is one of the most vital aspects of sports for young people.

Still, with every advantage you can name for high school football, it remains a sport that leads all others when it comes to sports injuries. This is exactly why it’s imperative for student athletes and parents to understand how to reduce the chance of injuries on the playing field that could impact them for the rest of their lives. That includes chiropractic care that prepares the body to perform optimally in an environment that includes someone trying to knock you into next week.

But the autumn doesn’t just bring football to the older teens of high school; Pop Warner Football initiates boys and girls as young as 5 years old to the gridiron.

Football is a perfect storm for injuries since it is a full contact sport that also involves moving at high speeds. Although overuse injuries can occur, they are not as common as:

Are Injuries Preventable with Chiropractic?

Football injuries are often preventable injuries, according to the Center for Injury Research and Policy. The conditioning young football players go through in order to prepare their bodies for play can be enhanced with the help of chiropractic care. Targeted strengthening and stretching routines in conjunction with adjustments can help keep a young body flexible and aligned. And a strong, aligned body is one that may be able to withstand injury in the first place.

The American Chiropractic Association has reported that joint manipulation administered by a chiropractor can help to speed recovery and help control pain when an injury is sustained. As much as high school kids think they’re invincible, they certainly aren’t, and even minor injuries are bound to happen. Chiropractic can help them heal if they are injured through targeted treatment and therapies. While chiropractors perform many types of adjustments there’s no such thing as a chiropractic attitude adjustment, though. You’re on your own with that.

Chiropractic: A Line of Defense

As with most sports, football also sees its fair share of back and neck injuries. Chiropractors strongly believe that patient education is a crucial line of defense against injuries like these. If your teen athlete has a basic understanding of how the spine works and what positions they should avoid when they play, it can go a long way toward injury prevention.

It’s also important to help your student athlete understand the importance of stretching both before and after games. If muscles aren’t warmed up and stretched prior to a game, it will make an injury more likely and they’ll get fatigued much quicker. If they don’t cool down adequately, they may be more likely to experience painful muscle cramps from their tired muscles. A great coach will teach this to his players, but it never hurts to have your chiropractor reinforcing the message.

What a player learns off the field can be just as important as the things they learn on it. If you have a young football player in your life, you need a chiropractor on your team.