Hugging For Health: A Little Affection Goes a Long Way 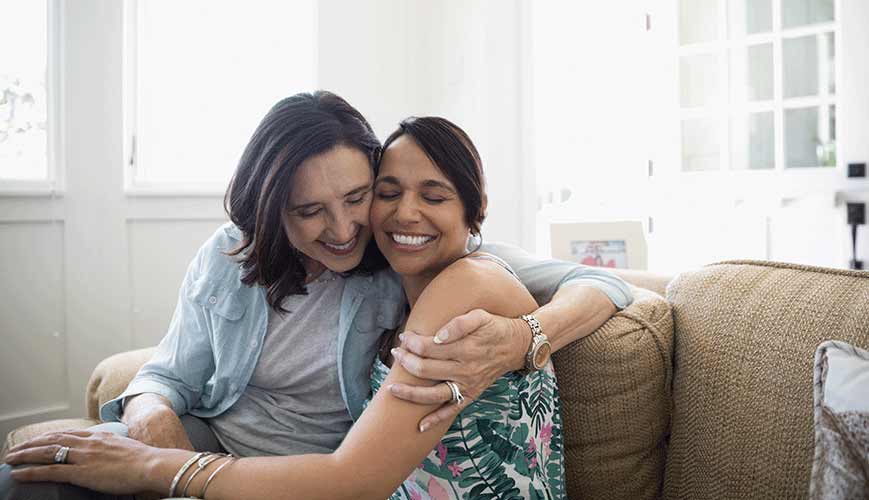 If you have someone in your life whose parting words usually include “hugs and kisses,” you may have more than just a relationship that’s sweet as candy. Sure, demonstrations of affection can give you good feelings, but experts say you’re also receiving benefits to your health.

A study at Carnegie Mellon University in Pittsburgh collected data supporting the theory that hugging contributes to your wellness. Researchers found that participants who perceived a level of social support and physical hugs were less likely to come down with colds after being exposed to the virus, says an article in U.S. News & World Report. And among those who did come down with the common cold, their symptoms were minimized by the presence of emotional support. The researchers concluded that 32 percent of results showing a beneficial effect on the study’s participants could be attributed to hugging.

"Hugging protects people who are under stress from the increased risk for colds (that’s) usually associated with stress," says Sheldon Cohen, a professor of psychology at Carnegie Mellon and author of the study. Hugging "is a marker of intimacy and helps generate the feeling that others are there to help in the face of adversity."

It may be the release of bonding hormone oxytocin that decreases stress and contributes to wellness, according to experts. Among its advantages, oxytocin cements attachment, which has been measured in mothers and their newborn babies. The hormone is created in the hypothalamus area of the brain and enters the bloodstream through the pituitary gland. At the same time, oxytocin that remains in the brain affects you -- mentally and physically.

"When you're hugging or cuddling with someone, (he or she is) stimulating pressure receptors under your skin in a way that leads to a cascade of events including an increase in vagal activity, which puts you in a relaxed state," says psychologist Tiffany Field, director of the Touch Research Institute at the University of Miami School of Medicine.

Stimulation of the vagus nerve, which triggers a release of oxytocin, results in lower levels of stress hormones cortisol and norepinephrine, Field says. It matches the results of a study of new mothers at the University of North Carolina School of Medicine in Chapel Hill, where researchers found that higher oxytocin levels were associated with lower cardiovascular and sympathetic nervous system reactivity to stress.

Oxytocin increases the levels of serotonin and dopamine, sometimes referred to as “feel good hormones.” In a study at Ohio State University, when scientists gave research animals a chemical inhibiting their production of oxytocin, they became depressive.

"Like diet and exercise, you need a steady, daily dose of hugging," Field says, adding that it must be strong enough to stimulate the release of oxytocin. "If you get a flimsy hug, that's not going to do it. You need a firm hug.”

You get more than just a release of hormones with chiropractic care, say researchers at the University of Minnesota. Named for Greek terms “cheir,” which means “hand” and “praktos,” which means “done,” chiropractors are experts in the healing touch of manual manipulation. As an alternative to the invasive and risky treatments patients are often steered toward through conventional medicine, such as medications and surgery, chiropractic treatment gives you all the benefits of a hands-on approach.

The University of Minnesota site lists many of the reasons patients seek the help of a chiropractor:

“People don't need to have a specific complaint to benefit from a visit,” the site says. “Chiropractors also focus on ongoing preventive and wellness care.”

While some individuals seek chiropractic advisement for a musculoskeletal assessment, lifestyle guidance or pain treatment, spinal manipulation is a form of wellness maintenance many individuals receive on a regular basis.

Chiropractic patients get the natural benefits of their specialized training, as well as the added bonus of the benefits of touch.

Research shows that touch can have a positive effect on patients because it stimulates a system of nerve fibers called C-Tactile afferents, or CTs, according to a study from the UK published in the Public Library of Science journal, PLOS One.

Researchers measured reaction to touching by gauging heart rate and facial electromyography -- smiling, in other words. They could monitor activity in facial muscle sites and record what caused a positive reaction known as zygomaticus major, and the negative effect, or frown, called corrugator supercilia. They report that manual stroking causes smiling muscles to engage.

“In highly social species, across the lifespan, touch plays a central role in the formation and maintenance of relationships,” the report says. “Between an infant and caregiver, within primate hierarchies and in romantic relationships, tactile interactions are rewarding, buffer physiological and psychological responses to stress, and ultimately enhance well-being. For example, parental touch is a key regulator of an infant’s physiological and (behavioral) arousal and in adults, supportive physical contact from a spouse or partner has been shown to modulate physiological responses to an acute stressor to a significantly greater degree than verbal support.”

While there are other hugs and kisses that contribute to a feel-good effect (Hershey’s, for instance), physical contact is a more effective stimulant. And knowing what we do about the benefits of affection, the sweetest, and most accurate, salutation may be “take care!”