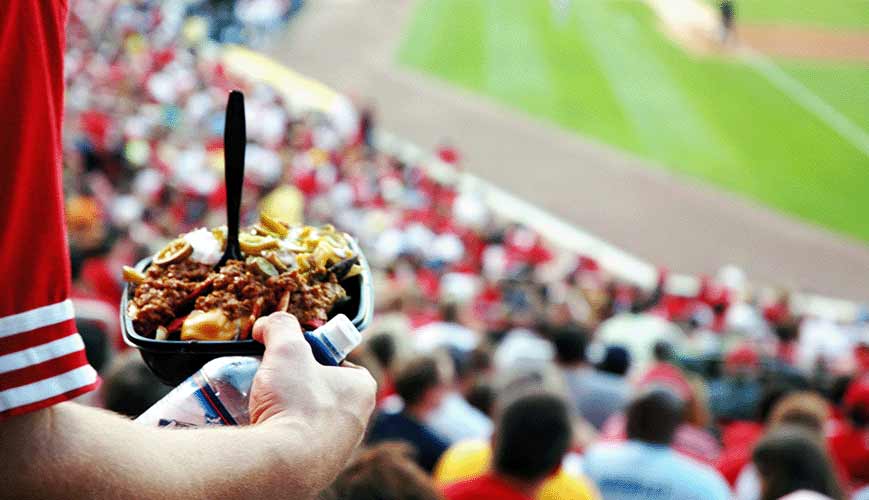 A change of season means a change of routine and few are as welcome as the start of Major League Baseball. If you’re a one-and-done fan, we’re not talking to you. But if you’re a die-hard season ticket spectator, this is the year to call some healthier plays -- for your body’s sake.

Whether you’ve got a 20-game package, a 40-game package, or you’re in for every game of every homestand, the ballpark can be plenty uncomfortable regardless of whether your team is a winner. From cramped quarters to heart attacks in a bun, owning season tickets for America’s pastime can be a real downer to your health.

Only There for the Food

Stadiums are famous for some of the craziest combos in fast food choices -- and some of the unhealthiest. Familiar comfort food is part of the ballpark experience, whether it’s Dodger Dogs in L.A., Skyline Chili in Cincinnati or CHUburgers at Coors Field.

A CBS Sports reporter checked out some of the newest options in ballpark cuisine and found they’re creative, but many have the makings of a force play -- to the ER, that is.

If you’re in Tampa you have to try the Reuben Cuban. Or if you’re headed to Houston’s Minute Maid Park, you’ll probably have fan favorite Torchy’s Tacos, which you can now top off with the .45 Express (named for Nolan Ryan and the original Colt .45 team), a hot dog topped with the firepower of Cheetos and jalapenos. Over in Arlington where the Rangers play, there’s the Texas Snowball: a brisket rolled into a ball, wrapped in funnel cake, covered in powdered sugar. Almost tame by comparison, the Arizona Diamondbacks’ stadium features the Asada Dog, which is 18 inches of hot dog topped with queso blanco, guacamole, carne asada, and fries. We’re big fans of guacamole, but just because you stick avocado on something doesn’t make it healthy.

If you are what you eat, an entire season of ballpark food is bound to re-sculpt more than just your outward appearance. This stuff is chin music to your arteries.

So, What Else is New?

The MLB’s second oldest stadium has been undergoing off-season upgrades since 2014, according to Ballpark Digest. With Wrigley Field’s renovations in Chicago, Cubs fans can turn their rally hats back around as the gates are slated to open April 8 for a game against the Pirates.

The good news/bad news is that now there are even more concessions on the upper deck. It’s convenient, but it makes Budweiser and those Big Slugger Nachos more accessible, requiring an added measure of restraint as the Cubbies go for the playoffs for a record fifth consecutive season.

Faithful fans don’t care about Wrigley’s clubhouse upgrades as much as changes to stadium seats. But management hasn’t improved the ergonomics of the seats -- they just renumbered them.

With 81 home games on the schedule for full season ticket-holders, the scourge of health problems from excessive sitting could rise to crisis levels. Studies abound saying that our society’s trend toward sedentary work space and free time screen time are causing such conditions as obesity, heart disease and diabetes. And baseball is plenty sedentary; in 2018, the average game time dropped by five minutes, to an even 3 hours.

And while you’re sitting too much, plan on being uncomfortable too. A USA Today article says that part of Wrigley’s renovations have made some of the seats down the left- and right-field lines even smaller. That’s not good news for Midwesterners, especially if they’re a bit on the hefty side from eating those Big Slugger Nachos. Fans have weighed in about the new seating, calling it the “120-pound or less section.”

Texas Rangers fans are the lucky ones. The new Globe Life Park, under construction and scheduled to open in March 2020, is including larger seats, according to the Star-Telegram. The design team plans for 18-19 inches in seat width (fairly standard, actually), but they’re attempting to increase the number of 20-inch seats in the $1.2 billion ballpark.

Albeit more pricey, one option to minimize the discomfort and time on your backside at the ballyard is to enjoy games from a suite. You can rent one to entertain clients or get your friends to split the cost. You have the freedom to walk around and you can exercise more control over the food served.

The Dodgers website lists the four-figure cost of one-time rentals in Chavez Ravine, which is in the $250,000 range for the whole season. The Colorado Rockies stadium rents Mezzanine Party Suites, which cost as little as $125 per ticket and you can sit or stand while enjoying catered food and beverages. Even better for your tush is the Rockies Rooftop Pass, a standing area that’s a fraction of the cost of many seats.

Bring it Home With Healthy Choices

If you’re stuck with a traditional mainstream seat, take advantage of the seventh inning stretch and more. Walk around when play is slow or there’s a pitching change. Or just do it every inning -- nobody’s going to look at you funny.

What you do outside the stadium has an impact on what happens in the park. University of Glasgow researchers found that moderate physical activity offsets negative effects from too much sitting, according to an article in Time. With 400,000 middle-aged UK residents whose lifestyles include sedentary screen time, scientists conducted fitness tests to draw a correlation between grip strength and health outcomes.

“The overall message is that it may not matter so much if you watch a lot of TV if you are strong, fit and physically active,” head researcher Carlos Celis-Morales says. “If you move and are more active, (sitting) will not have the same effect on your health as if you are inactive.” So even if you’re at the stadium and your team can’t score a run to save its life -- at least you’ve got great weather, San Diego and Miami -- it’s important to keep moving … and we’re not talking about fidgeting in a seat for the 120-pound-or-less crowd.

Your chiropractor can help you devise an exercise plan to improve strength and burn fat -- a strategy that enables you to enjoy ballgames but maintain a reasonable level of wellness. Regular stretching and chiropractic care are the best preventive measures, both in and out of season.

If watching your team is a pain in the bum -- literally -- see a chiropractor to determine if you’re developing a chronic postural condition that could affect your health.. Sitting with legs crossed or slouching for hours at a time can compromise your spinal joints, which is typically treated with specific chiropractic adjustments to the areas in need..

Staying in good physical condition by including routine chiropractic care will help ensure those three hours in the Terrace Level don’t send you to the sidelines. It might be the only way you survive extra innings.