Sports in a Pandemic: Caution Is High But COVID Is Lurking 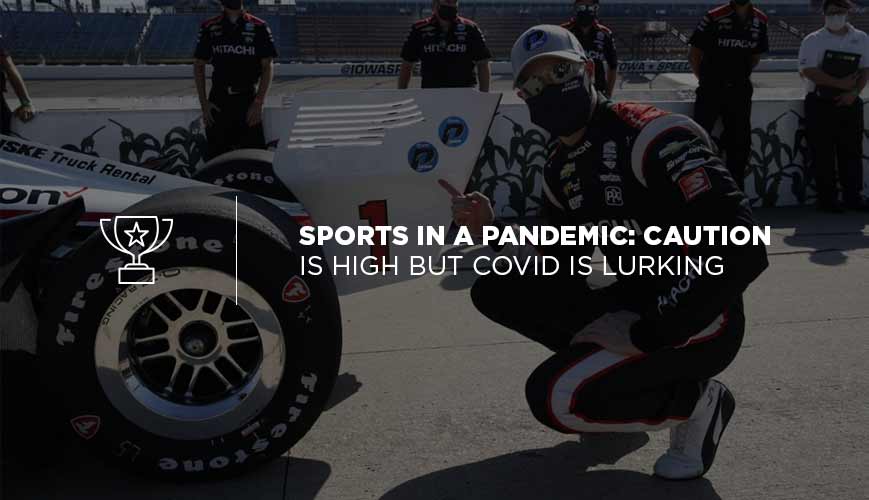 Like a lot of corporations in nearly every industry, athletic organizations are trying to navigate the COVID-19 crisis to get professional athletes back in action this year for their fans (and their bottom line). Many are starting or restarting the season with only virtual fans, and some interesting new protocols have been put in place to lower the risk of infection for players and team associates in an attempt to give sports fans nationwide something they want -- a season.

For Major League Baseball players, spring training at dozens of camps became summer training in their own ballparks as teams got started July 1 after an all-team timeout was called in mid-March. But the biggest changes are occurring during the baseball season, beginning with no fans in the stands and an attempt to reduce interaction between fans and players outside the stadium to avoid contagion.

To minimize the risk of infection among players, there were some COVID-19 protocols put in place. There is no spitting allowed by players, which is a monumental move; spitting is as common as scratching and 0-2 curveballs among major (and minor) leaguers. As well, pitchers are allowed to carry a wet rag to moisten their hands so they won’t lick their fingers. It will be extraordinarily interesting to see if players can comply because these are often automatic reactions, like flipping a turn signal while driving; it’s done without thinking.

All players will have their temperatures taken every other day and if it registers above 100.4 degrees Fahrenheit, they will be sent home. Players have been instructed to take their own temperatures before reporting to the stadium each day and, if it’s high, to stay home.

Like many sports, the MLB schedule was trimmed down -- to 60 games. There are 40 games within the division and 20 interleague games instead of the traditional 162 games in a season. Elsewhere, the Indianapolis 500 was rescheduled for August 23, 2020 at Indianapolis Motor Speedway, a break from its traditional Memorial Day weekend, but the historic 46th running of the Grand Prix of Long Beach (Calif.) was canceled. NTT IndyCar Series owner Roger Penske has said that the Indy 500 -- the world’s biggest race -- will not run unless fans are present, and usually there are about 300,000 of them along the 2.5-mile course.

The NASCAR Cup Series began in Daytona on Feb. 9 this year, but it was interrupted due to the coronavirus crisis; the race at Texas Motor Speedway, originally scheduled for March 29, finally took place on July 19. When the stock cars took to the track at Bristol (Tenn.) Motor Speedway on July 15 with fans in attendance, it was the first major sporting event in America that included a significant number of onsite spectators in an enclosed “arena” environment since the pandemic shutdown; there were about 20,000 fans at a half-mile track that seats more than 160,000.

By contrast, PGA Tour officials decided to play golf without fans present for the rest of the season. They first responded to the pandemic by canceling the Players Championship match slated for March 12-15 and returned to the course on June 11, with three of the four major tournaments postponed.

The NCAA men’s and women’s basketball championships were canceled outright to the chagrin of players and everyone hoping to win their office March Madness pool.

The National Hockey League season was suspended indefinitely. Earlier this month, the NHL reported that 35 players had tested positive for COVID-19.

The National Basketball Association reported that 25 players had tested positive. The NBA was the first sport to react to COVID-19 with its shutdown on March 11 after Utah Jazz all-star center Rudy Gobert tested positive. The NBA will resume on July 30 for 22 of its 30 teams. All remaining games -- eight games to establish seeds for the playoffs -- will be played on three sites at Walt Disney World Resort in Florida without fans.

The National Football League hasn’t finalized the plan for its fall season, but an ominous note is that the Denver Broncos have offered refunds to 2020 season ticket holders ahead of the scheduled opening of training camps on July 28. It’s a complex logistical task, competing in 22 states with more than 2,000 players and hundreds of collateral personnel..

Not since entire seasons were canceled during World War II has sports been turned so upside down.

While reducing the risk of coronavirus infection has been the subject of increased attention, the necessary training restrictions have increased the possibility that players will get physically injured this year. An article in Science Daily says that athletes returning to contact sports are at great risk.

Although many individuals have continued their conditioning on their own, it’s not enough in some cases, says Professor Keith Stokes at the University of Bath and England Rugby in the U.K.

“This is because, in addition to physical fitness, such sporting activities require training in evasive (maneuvers) and contact situations,” he says. “It is also near impossible to practice and hone the skills for game strategy when working alone.”

That’s a contributing reason that the NFL players union negotiated two fewer exhibition games this season leading up to their hopeful kickoff in September. Researchers cite the NFL’s 20-week lockout in 2011 as an example. There were more injuries than usual when players returned to the field -- and for most it was a literal Achilles heel problem.

Without proper training facilities to prepare for the season, athletes lack the progression of conditioning needed for high levels of performance. That means they need to take extra caution when returning to the field of play.

Some of the measures suggested for these returning athletes are:

Because of the setbacks from inadequate training, team chiropractors have a bigger job than usual this year. Chiropractic care is a trusted treatment for pro players, both on and off the field, as they help athletes find relief from injuries as well as maintain wellness year-round.

Most professional teams employ a sports chiropractor who both serves the individuals and optimizes their performance for the organization. A blog by the National University of Health Sciences offers reasons why chiropractic care is a benefit for athletes:

Sports programs all over the world are considering the health risks and taking some historic measures. With no fans in attendance to watch free throws and home runs, many franchises are losing millions of dollars. But it’s a small price to pay for good health. After all, fans aren’t the only ones who need to play it safe.