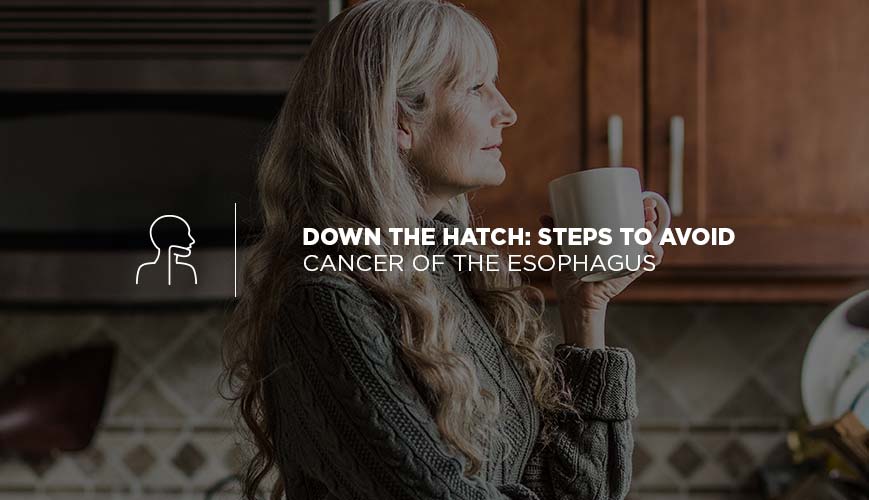 While you’d find virtually no overlap in the fan bases of Humphrey Bogart, Eddie Money, and Robert Kardashian, they did have one thing in common: they each died of esophageal cancer. The risk of contracting the disease is heightened by tobacco and alcohol use, but other causes of esophageal cancer remain shrouded in mystery.

What Is Esophagus Cancer

Cancer of the esophagus refers to a pathology that develops in the cells of the muscular tube connecting the throat to the stomach, according to the American Cancer Society.

The ring at the top of the esophagus is the upper esophageal sphincter, which relaxes when it senses the presence of food or liquid. The gastroesophageal junction links the esophagus to the stomach, controlling the flow of food and closing to keep digestive juices from rising and reentering the tube.

Cells can become cancerous anywhere in the esophagus but typically begin growing in the inner layer of the organ’s wall, called the epithelium.

Gastroesophageal junction tumors - Sometimes cancer cells form in the top 2 inches of the stomach and at the point where the esophagus meets the stomach. They resemble esophageal cancers and are treated the same.

Rare esophageal cancers - There are cancers that are detected and treated in other parts of the body but may start in the esophagus, including:

Symptoms and Causes of Esophagus Cancer

The sixth-most common cause of cancer death, esophageal cancer is often in its late stages before you become aware of it, says an article by the Mayo Clinic. Symptoms include.

Patients with a precancerous condition known as Barrett’s esophagus should watch for signs of worsening symptoms. It is caused by chronic acid reflux and raises your risk of developing esophageal cancer.

Medical experts are not completely clear about the cause of cancers of the esophagus. Factors that increase your risks include:

Obesity and GERD are at the center of a discussion around an increase in cases of esophageal adenocarcinoma in people under 50 years old, according to an article on the website SurvivorNet.com. A study published in Cancer Epidemiology, Biomarkers & Prevention cites a 2.9 percent upsurge from 1975 to 2015.

“There appears to be a rise of esophageal, gastric and colon cancer among young people, which is a population that is typically less likely to get diagnosed with gastrointestinal cancer,” says Dr. Emily Nachtigal, a UCLA-Olive View hematology-oncology fellow. “It might be that their type of cancer is inherently worse, or it could be due to delay in diagnosis. It can be hard for patients to be taken seriously when they are otherwise young and healthy.”

Dr. Don C. Codipilly, lead author of the study and Mayo Clinic gastroenterology fellow, advises physicians not to discount symptoms such as difficulty swallowing -- even among young people. The five-year survival rate is only about 20 percent, but upper endoscopy screenings provide early detection, which can greatly improve the prognosis for esophageal cancer patients.

In addition to being aware of possible symptoms of esophagus cancer, individuals can lower their risk through:

The statistics are tough to swallow, but you lower the risk of a serious prognosis with early detection. Preventive measures offer another layer of protection while they boost your overall health as well.

Even if you didn’t “smoke like a chimney and drink like a fish,” as the late Texas Governor Ann Richards confessed before she succumbed to cancer of the esophagus, it makes sense to know the signs. Because waiting too long can put you in some pretty heady company.