Body and Mind: The Impact of Stress on the Immune System 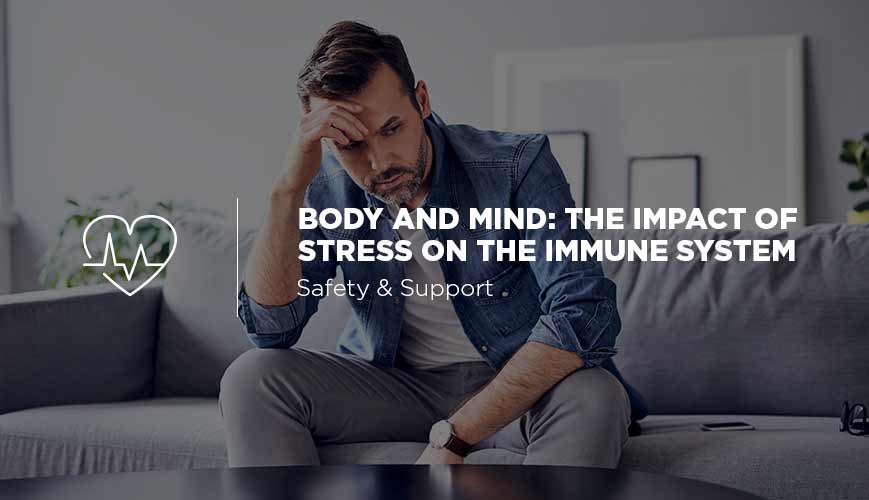 The connection between mind and body is acknowledged by wellness experts of all kinds. Collaborative research by scientists confirms that your state of mind is linked to health conditions ranging from stomachaches to heart disease.

One example of the impact your mind and emotions have on your health is the link between stress and your immune system. While some stressors help in the short term, chronic stress stemming from the pressures of relationship strife to challenges at work can cause serious long-term health problems.

The American Psychological Association website describes some of the early research in the field of psychoneuroimmunology which points out the mind-body connection. A study of medical students in the 1980s and 1990s supports the link between stress and a reduced ability to fight infection. Data shows that participants had a suppressed immune system response each year during a three-day exam period. The data showed a reduced number of T cells, which fight infection, and they nearly stopped producing gamma interferon, a substance that boosts immunity.

The decades of research since then has broadened in scope, including studies about who is more prone to immunosuppression and the types of mental disorders contributing to it.

A study at Johns Hopkins School of Medicine says that older people with chronic mild depression have a greater chance of immune system suppression. Participants in their 70s who were caretakers of Alzheimer’s disease patients had weaker lymphocyte T cell responses, which is an indicator of your ability to fight viruses and bacteria. Though they were just mildly depressed, their age added to the negative impact on their immune system -- even when tested 18 months later.

An article by the Cleveland Clinic discusses the link between stress and inflammation, which is a physical response by your immune system. The effect of stressful circumstances on your health is directly tied to the length of time your body responds to a stressor.

Chronic inflammation can raise your chance of developing conditions such as:

Suffering from the emotional challenges of stress can also result in other serious health issues, including cardiovascular diseases, gastric ulcers, and type 2 diabetes.

A report from scientists at the Stanford University School of Medicine points out the difference between the impact of short-term and long-term stress on your body. One is detrimental to your immune system while the other actually boosts your ability to fend off disease.

The immediate fight-or-flight response to stress increases your immune responsiveness, according to Firdaus Dhabhar, Ph-D, associate professor of psychiatry and lead author of the study. The hormones triggered in response to a stressor make you more ready to fight infection, heal wounds, and provide other healthful reactions.

In response to immediate threats, it mobilizes immune system cells for minutes or hours, which stimulates your body’s ability to heal itself.

“Nature uses the brain, the organ most capable of detecting an approaching challenge, to signal that detection to the rest of the body by directing the release of stress hormones,” Dhabhar says. “Without them, a lion couldn’t kill, and an impala couldn’t escape.”

By contrast, long-term stress erodes your health by suppressing your immune response to stressful situations.

The pattern generated by a stressor involves redistribution of immune cells by three hormones, which the researcher compares to a military reaction. Norepinephrine mobilizes major immune cells into your blood, including lymphocytes, neutrophils and monocytes. Epinephrine mobilizes neutrophils and monocytes and sends lymphocytes to “battlefield destinations” such as your skin and mucous membranes. Corticosterone is released later and sends all immune cells to those battlefield zones.

The negative effects of long-term stress can be counteracted through stress management, the APA article says. In the studies by the Cleveland Clinic, students who were trained in relaxation techniques showed better immune function during exams than those who did not add a regular practice of relaxation.

One of the key factors is duration of the stressor, and social support is significant in counteracting depression, says a study at Carnegie Mellon University. Their research shows that feelings of loneliness and social isolation suppress the immune system.

They developed their conclusion after measuring the feelings of students reporting with a handheld computer and measuring levels of the stress hormone cortisol through saliva samples. Those with smaller social networks who experienced the most isolation had weaker immune responses.

There are two techniques suggested by Leonard Calabrese, DO, of the Cleveland Clinic.

Yoga is proven to lower levels of cortisol, increase feelings of calm, and reduce inflammation. While particular poses increase circulation throughout your lymphatic system, deep breathing serves to produce calm and boost your immunity to infection.

Lifestyle choices that contribute to effective stress management include adequate sleep, daily exercise and spending time with friends and family.

Addressing your state of mind is as important as paying attention to signals from your body. When you’re undergoing a stressful situation or have a long-term challenge, there’s no better time to maximize your immune system.

Wrist Tendinitis: Arm Yourself With This Handy Information

By Sara Butler Wrist tendinitis happens. Doesn’t matter who you are. From a weekend warrior to a two-time …

Doctors Don’t Know Everything, and the Responsibility Is on You

By Dr. Molly Casey Has every mechanic you’ve met been exceptional? Do you blindly follow their advice? …

Actions and Appetite: Natural Ways to Suppress the Urge to Eat