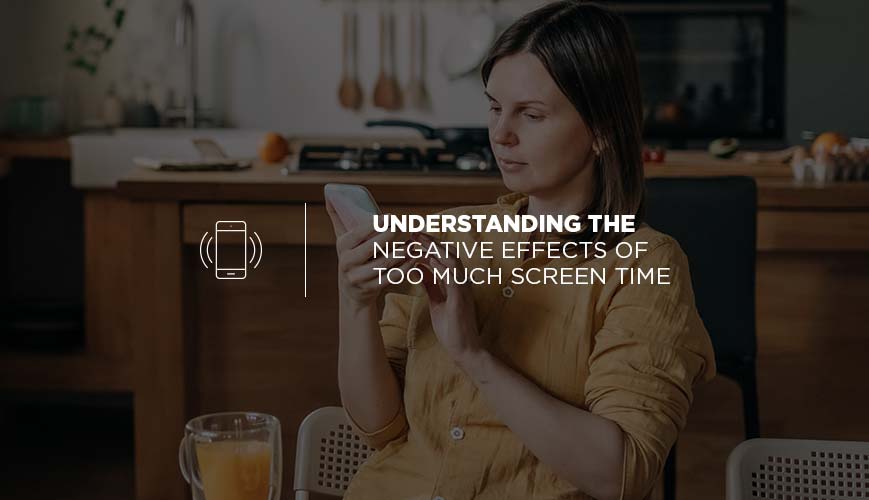 Let’s face it, everyone is spending a significant amount of time and energy in front of screens whether it’s a computer screen, a television screen, an iPad, a Kindle or cell phone. If you’re in western society -- heck, most of the world -- you can’t avoid it.

Research shows that the average person worldwide spends nearly seven hours daily looking at a screen for internet-based activities such as computer work, social media, music, or podcasts. This is a good chunk of the day, every day. So it’s wise to gather information about some of the effects of screen time so you can choose if you want to continue at the rate you’re going or perhaps cut down where you can.

It’s important to understand the impact of screens on children and their long-term health, and the role screens can play in addiction of adults.

There are different types of effects that screen time has on the structure of your body. None of them are beneficial, though some can be mitigated by the way you use the screen.

Poor posture - Few people have truly good posture. Spending time on screens makes poor posture even worse. The common improper postural patterns are rounded shoulders, forward head carriage, and exaggerated or decreased low back curve. These patterns cause spinal subluxation, which is an improper motion in spinal joints. This can negatively affect the ability of the brain to communicate efficiently with the body, and vice versa, to create seriously poor health over long periods of time. In addition, tight muscles, weak muscles, irritated nerves, and disc problems are all issues that then ensue. You can bet that pain results in these situations. Your posture can suffer greatly with increased screen time.

Stressed sleep - Screen time does not help sleep patterns. Sleep is imperative to health and the healing process. Melatonin is a hormone that the brain releases normally in response to darkness. It helps create and maintain healthy and regular circadian rhythms, aka sleep patterns. Electronic devices emit blue light, which decreases the release of melatonin; some research shows that blue light does so significantly when done within two hours before bed.

Increased cardiovascular risks/obesity - Screen time is directly related to inactivity and a sedentary lifestyle. Even though many use their YouTube or music app while they work out, or watch television while on the treadmill, most of the average 6 hours 57 minutes spent daily on the screen do not occur while moving. Inactivity and sedentary lifestyles are associated with obesity and cardiovascular issues, such as high blood pressure and high cholesterol. The old saying “move it or lose it” applies here. It is necessary to challenge your heart and body in positive ways to maintain its function, otherwise the heart will need to work harder to perform routine daily tasks; you’ll spend energy on simply existing. Diets are often poor in sedentary lifestyles, leading to diminished fitness and health.

Physical movement and quality in-person connections with people are necessary elements of well-adjusted people with stable mental and emotional health. Depression and anxiety are widely known to be associated with inactivity and poor sleep patterns. Inactivity, and interruption in the circadian rhythm, are both effects of screen time. Increased screen time has shown, in studies here and here, an association in adolescents and college students with anxiety, depression, decreased mental well-being, and suicide ideation. This is serious stuff and very real.

Researchers estimate the brain is fully developed somewhere between 25 years old and early 30s. Screen time nowadays often begins well before the child can walk. It’s common for kids to have their own tablets. The sheer number of years this generation of children are exposed to screens, along with the time spent daily in front of those screens, has repercussions on the developing brain.

The National Institutes of Health funded the largest, longest study of brain development and child health in the United States. The study involved more than 11,000 kids ages 9-10 who were tracked through teenage years into adulthood looking at biological and behavior markers.

So far, the study has shown that kids who have more than two hours of daily screen time score lower on language and cognitive tests. When the kids spend more than seven hours daily with screen time, there is a thinning of the brain’s cortex – an area related to critical thinking and reasoning.

Although researchers haven’t concluded exactly what this means, Dr. Jennifer Cross stated they have hypothesized “that screens could inhibit certain aspects of a child’s development by narrowing their focus of interest and limiting their other means of exploration and learning.” With increased screen time, there has also been evidence that shows lower skills in reading tests and deficiencies in an ability to hold attention.

By limiting a child’s focus of interest, lowering their ability to read, and diminishing their attention span, it is quite likely to expect that there will be behavioral and social repercussions as well.

A simple definition of addiction is an urge to do something that is hard to control or stop. Addictions also create changes in the brain and they are often related to higher levels of the neurotransmitter, dopamine. Dopamine plays a role in pleasure, motivation, and learning.

Screen use, such as internet time, has been shown to release the chemical dopamine, so it can become an addictive activity. As dopamine is repeatedly released, the brain begins to crave more and more. When the substance/activity that one is addicted to is ingested or participated in, more dopamine is released -- and more frequently. It’s a cycle. This can happen in kids and adults alike. More screen time, more hits of dopamine. As levels drop, more screen time is required to keep the brain’s craving for dopamine satisfied.

Some evidence of screen addiction can be screen time getting in the way of daily activities (hygiene, chores, homework), and spending more time with virtual friends than real people; other examples are screen time being a portal to your happiest place, there’s conflict around the amount of time spent in front of the screen, work/school is suffering, and you feel agitated or uncomfortable without the phone, tablet or computer. These brain changes are real, and so is the addiction, downfall, and suffering associated with losing control.

Although electronics have certainly had a positive effect in modern society, they also come at a cost. It is wise to pay attention to the amount of time you and your kids spend in front of the screen daily and to monitor your relationship with electronics. This is not to be taken lightly if you are looking to be as healthy as possible. Use the screens wisely, let it benefit your work and some entertainment, but don’t forget the rest of your life and health.

Completely avoiding screen time is not a realistic option, but most people can decrease their time on it. To go even further, there are ways to mitigate the effects, such as using chiropractic care for postural issues, using special glasses that block blue light, and/or sticking to a schedule (particularly at nighttime) that does not have screen time access for at least one hour prior to bed.