Welcome to The Joint Chiropractic - MacDill Air Force Base! As your Tampa chiropractor dedicated to family chiropractic and spine health, we invite you to join the millions of Americans who have not only found relief from lower back pain, sciatica pain, and migraines, but also a pathway to wellness with chiropractic's natural, drug-free approach to healthcare.

How can chiropractors at The Joint Chiropractic in Tampa help you?

Whether you have seen a chiropractor in the past or are seeking a local chiropractor near you for the first time, expect your visit to The Joint Chiropractic - MacDill Air Force Base to be different from any healthcare experience you've had before. Perhaps even life-changing.

Here are a few reasons why The Joint Chiropractic in Tampa is your perfect destination for pain relief and preventative care:

So whatever “symptoms” you or your family may be experiencing, visit our Tampa chiropractic office today to learn more about how you could improve your overall health and well-being. And remember, you never need an appointment to visit, so stop in when it is convenient for you. We look forward to seeing you soon!

Dr. Scott Tashman became part of The Joint Chiropractic’s team of local healthcare providers in 2021 when he began serving residents served by MacDill AFB, where he does the work he finds so gratifying.

“The best thing about being in the chiropractic field is helping people meet, achieve, and sometimes even exceed their health goals naturally with common sense, allowing them to have a better quality of life,” he says. “It’s rewarding to be looked to for advice from the viewpoint that patients are unlikely to get from any other source. It’s exceedingly satisfying.”

Dr. Scott, as his patients call him, was born and raised in New York City and worked there previously, as well as St. Petersburg, Clearwater, Brandon, and Lakeland. In his spare time he plays guitar in a four-piece rock ‘n’ roll band. He also plays tennis. He and his wife, a retired respiratory therapist, have an adult son who lives in St. Pete. They also have a diva greyhound, “our third greyhound in a row.”

Dr. Scott received his bachelor’s degree in science at S.U.N.Y New Paltz, N.Y., then got his B.S. and Doctorate from National College of Chiropractic in Lombard, Ill.

In Case You Didn't Know

Dr. Scott says the one thing he always keeps stocked in his pantry are Halos (also called Cuties or Clementines), a tiny hybrid of mandarins and sweet oranges. “I’m not sure how,” he says, “but I’ve become addicted to these and eat several a day.”

If he could bring together any four people from history for his ideal dinner party, Dr. Scott would bring together entrepreneur Elon Musk, artist Salvador Dali, author Kurt Vonnegut, and comedian Mel Brooks. “I would love to see how this group of insanely talented individuals, all in different fields, would interact,” he says.

He says the coolest thing he has done was stand on top of the Potala Palace in Lhasa, Tibet: “It’s truly as far from Florida as one can get in more than just geography.”

The MacDill AFB clinic location is proud that Dr. Ryan Stookey joined its team in 2021 to provide important healthcare services to the local community.

“The best thing about being in the chiropractic field is allowing a patient’s body to heal naturally by removing nerve interference so they can function at close to their 100 percent potential,” he says. “It’s rewarding to help a patient get their life back when pain and injury have taken it away from them.”

Dr. Ryan, as his patients call him, grew up in Western Pennsylvania and has worked previously in Spring Hill and Port Orange, as well as Knoxville, Tenn., and Greenville, S.C.

A graduate of California University of Pennsylvania with a bachelor’s degree in athletic training and masters degree in exercise science and health promotion, Dr. Ryan earned his doctorate from Palmer College of Chiropractic in Port Orange, Fla.

“I had been getting adjusted regularly since I was 12 and it helped me a lot with my asthma and allergies,” he says. “During my sophomore year of college, I drove home and got adjusted, and the conversation turned to my plans after graduation. I knew I wanted to get an advanced degree in healthcare but I was undecided if I would pursue something in sports medicine or orthopedics, possibly even as a surgeon. Toward the end of our conversation, he looked me in the eye and asked, ‘Have you ever considered chiropractic as a profession?’ That was the light bulb moment when it all came together and I knew that chiropractic would give me the ability to help people naturally while also utilizing all my training in sports medicine.The rest, as they say, is history.”

Dr. Ryan says the best part about working at the Joint MacDill Air Force Base “is being able to serve the men and women who serve our country every day. Knowing that I am helping them stay active, healthy, and pain-free is very rewarding.”

Dr. Ryan says the one staple in his kitchen is Heinz 57 sauce “because it makes just about anything taste better!”

If Dr. Ryan could bring together any four people from history for his ideal dinner party, he would sit down with guitarist Eddie Van Halen, actor Christopher Reeve, baseball legend Roberto Clemente, and chiropractic founder Daniel David Palmer. “Van Halen is my musical hero and changed the way an electric guitar could sound, playing with an unparalleled joy and enthusiasm while altering the rock music landscape at the same time,” he says. “Christopher Reeve played Superman in the 1980s, of course, but it’s his actions after suffering a spinal injury -- when he became an activist for spinal injury research and better insurance coverage for the disabled -- that are an inspiration to me. Clemente was a pioneer as one of the first Latinos to play Major League Baseball and the first Latino to be enshrined in the Baseball Hall of Fame, but his charity work and generosity to others were his biggest contribution to the world. And finally, Dr. DD Palmer, the founder of chiropractic, single-handedly changed the trajectory of healthcare by discovering a natural method to be used to help the body heal itself. These four were all visionaries and used their gifts to serve others, and by doing so they helped change the world for the better.”

The most amazing experience of his life took place in his youth. “The coolest thing I’ve ever done is go on a two-week, 100-mile hike in New Mexico when I was 17,” he says. “We went with a crew of 12 -- nine kids, three dads -- and when we weren’t hiking to our next campsite, we spent our time trekking to the peak of a 12,441-foot mountain looking for T-Rex fossils, panning for gold, shooting clay pigeons, rock climbing and rappelling. It was such a cool opportunity to connect with nature, live off the land for days at a time, and spend quality time together with good friends. We had up-close and personal encounters with several bears, a few rattlesnakes, and even a brief cougar scare. All in all, it was an unforgettable experience and one I hope to relive again some day with my own two boys.”

Dr. Randy Middleman joined The Joint Chiropractic team in 2021 to provide local healthcare services to residents in and around MacDill Air Force Base.

“The best thing about being a chiropractor is the ability to help patients get back to their normal lives,” he says. “When patients come in to see me, they are a shell of themselves. When they leave the office, they are able to go back to living their normal lives. Being able to track patient progress first-hand is easily my favorite facet of the chiropractic profession.

Dr. Randy, as his patients call him, is a product of Philadelphia but has worked previously in Tampa. When he’s not working, he likes throwing the tennis ball around with his dog Milo, and relaxing at the beach.

“Growing up, I had a great relationship with my chiropractor,” he says. “She specialized in functional medicine. In high school, I started to have issues with my G.I. She was the only doctor who I met with who could find the root cause of my problem. She is one of the main reasons I ultimately became a chiropractor. Her great care over the years guided me into this profession.”

“I’m excited to work at MacDill Air Force Base. I come from a military family. I see the sacrifices that military members and their families make on a day-to-day basis. Having the opportunity to give back to a group of people that have given me so much was one of the easiest career decisions I have ever made. It was a no-brainer.”

Dr. Randy says the one thing he always keeps stocked in his kitchen is green tea: “Coffee and energy drinks make me too jittery. Green tea contains the perfect amount of caffeine for me to be productive throughout the day.”

If he could bring together any four people from history for his ideal dinner party, the table would look like a Hollywood studio commissary. Dr. Randy would assemble movie directors/producers David Chase (of The Sopranos) and Martin Scorcese, and actors James Gandolfini and Robert DeNiro. “The Sopranos is my favorite TV show while Goodfellas is my favorite movie,” he says. “Having the opportunity to break bread at Villa di Roma on 9th street in my hometown of Philadelphia with these four legends would be a dream come true.”

Dr. Randy says the coolest thing he has done involved education. “I was the first person in my family to go to college and leave the nest,” he says. “Although it wasn’t easy, I made the decision to attend chiropractic school in Port Orange, Fla., and I do not see myself leaving Florida any time soon.” 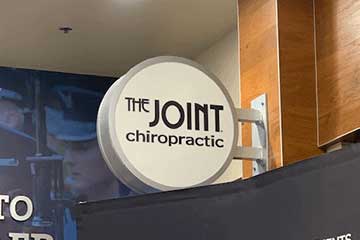 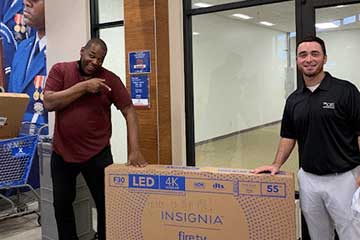 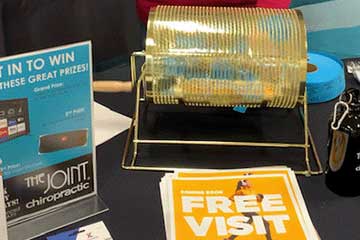