Welcome to The Joint Chiropractic - Tates Creek! As your Lexington chiropractor dedicated to family chiropractic and spine health, we invite you to join the millions of Americans who have not only found relief from lower back pain, sciatica pain, and migraines, but also a pathway to wellness with chiropractic's natural, drug-free approach to healthcare.

How can chiropractors at The Joint Chiropractic in Lexington help you?

Whether you have seen a chiropractor in the past or are seeking a local chiropractor near you for the first time, expect your visit to The Joint Chiropractic - Tates Creek to be different from any healthcare experience you've had before. Perhaps even life-changing.

Here are a few reasons why The Joint Chiropractic in Lexington is your perfect destination for pain relief and preventative care:

So whatever “symptoms” you or your family may be experiencing, visit our Lexington chiropractic office today to learn more about how you could improve your overall health and well-being. And remember, you never need an appointment to visit, so stop in when it is convenient for you. We look forward to seeing you soon!

A recent transplant in Kentucky, Dr. Angelopoulos attended La Sierra University in Riverside CA, majoring in Biology before moving on to receive her Chiropractic degree from Southern California University of Health Sciences. Chiropractic school was the last step in achieving her educational goals. Her hobbies include participating in Spartan Racing and mud runs with her husband and 3 children.

Dr. Jack was born and raised on a cherry farm in beautiful Traverse City, Michigan, where he spent the majority of his time enjoying the outdoors, and playing sports. His first chiropractic experience came after injuring his back while lifting weights. His curiosity with the profession began immediately after having his pain relieved after a single treatment.

He went on to attend Grand Valley State University, where he originally studied business, and then switched to the health sciences after chiropractic treatment helped him resolve a major shoulder injury. Following his undergrad education, he attended Palmer College of Chiropractic in Davenport, Iowa. During his time at Palmer, Dr. Jack earned an athletic scholarship for the rugby team and became an intern in the sports rehabilitation clinic.

In his free time, Dr. Jack enjoys working out, reading, and being active outdoors. He is passionate about human performance and is constantly learning the newest and most innovative ways to keep his patients pain free.

Stars Based on 2 Reviews

Read what our amazing chiropractic patients have to say about our chiropractors and care at The Joint Chiropractic - Tates Creek in Lexington, KY 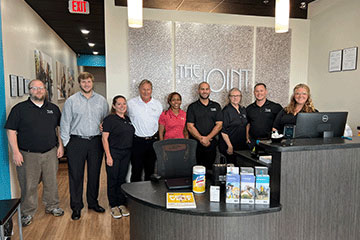 This clinic is owned and operated by Movement Wellness, PLLC and managed by Bluegrass Wellness Partners LLC