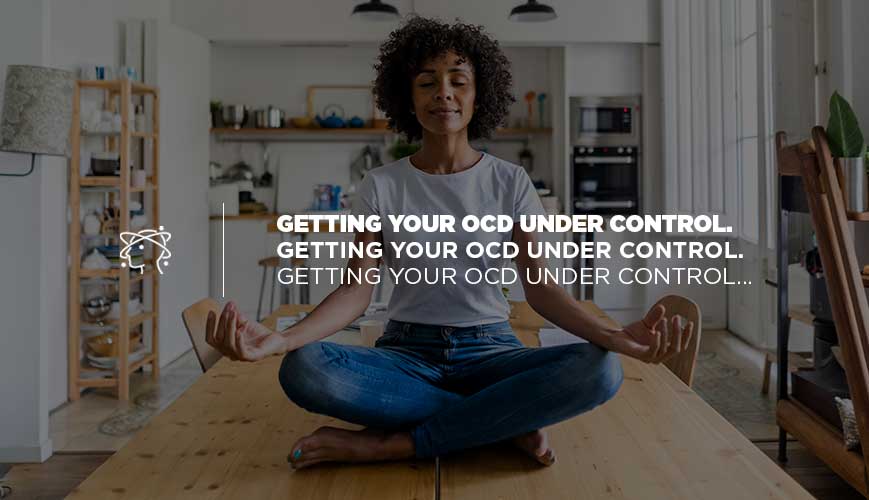 In the past, people with obsessive-compulsive disorder tended to keep it secret, sometimes leading to extremely introverted lifestyles. Howard Hughes was one of the most extreme examples. But today’s Hollywood crowd isn’t shy about their battles with obsessive-compulsive tendencies. TV personality Howie Mandel famously wrote a book about it, and singer Justin Timberlake and actress Charlize Theron have added their names to the growing list of self-diagnosed OCD sufferers.

You’ve probably had times when you couldn’t get a thought out of your mind -- a bad breakup or a nagging urge to repeatedly scratch an itch. But when a person has tapes playing in their head in a loop which translates into repetitive behaviors, it could be a sign they have obsessive-compulsive disorder. The chronic condition is defined by the National Institute of Mental Health as a disorder causing uncontrollable, reoccurring thoughts and/or behaviors.

While a professional can determine whether symptoms reach the level of an OCD diagnosis, there are signs that may mean you need intervention. If thoughts or behaviors are impeding your ability to develop healthy relationships or reducing your performance at school or work, you could benefit from an assessment by a mental health professional.

Obsessiveness refers to repetitive thoughts that plague a person with OCD. Some of the most common cogitations plaguing people with the disorder are:

A compulsive person has redundant behaviors they can’t minimize or control. Some of the most common compulsions for people with OCD are:

Sometimes physical movements, known as tics, accompany unrelenting thoughts experienced by someone with obsessive-compulsive disorder. Motor tic disorders are sudden and brief movements that may last over a long period or come and go in frequency. They can be facial grimaces, blinking eyes, or they can involve another part of the body such as shrugging shoulders.

One of the first steps in reducing the effects of obsessive-compulsive disorder is exposing its origins, according to an article on the Anxiety & Depression Association of America website. The problem with OCD isn’t the recurring thoughts, it’s the extreme reaction to those thoughts.

Even individuals who aren’t considered obsessive sometimes have intrusive thoughts, but for a person with OCD, it results in a higher level of distress that triggers more aggressive thought patterns.

To reduce “Intrusive Thought OCD,” you first need to see through the scare tactics caused by the network in your brain that tells you something is wrong. For instance, returning to the house because you left the stove on is reasonable, but when you have OCD it becomes a greater emergency because you imagine your loved ones are going to die and you worry that you’re at fault.

These overactive thoughts can be helpful in pinpointing the target areas that need attention because the kind of things your brain overreacts to is an indicator of what’s important to you. “Somewhere within an obsession is the flip side of a core value,” the article says. “If OCD taunts you with images and thoughts about offending God, then religion must be important to you. If OCD reviews all the ways your family could be hurt, then your family is clearly one of your top priorities.”

One useful technique to counter symptoms of OCD is called Exposure and Response Prevention, or ERP. It resembles desensitization, which you might use to tackle a fear of snakes or heights. The patient brings forward a distressing, reoccurring thought and practices disengaging from the compulsive behaviors associated with it. For instance, with a fear of drowning you may envision stepping into the shallow end of a pool and begin building a level of mental fitness by taking control over your anxiety.

By focusing on intrusive thoughts and choosing alternatives to compulsive responses such as seeking reassurance or exhaustive information seeking, you can decrease the persuasive power of OCD. Talk therapy can be a helpful method of exposing your obsessive thoughts and minimizing their impact by sharing them with an informed, empathetic individual.

While Exposure and Response Prevention is a frontline treatment option for OCD, one of the most discouraging facts about reversing patterns of compulsive disorders is its genetic component, says an article in Psychology Today. It’s easy to feel trapped by the constant torment of compulsions, which can cause additional stress and make it harder to manage.

OCD has been found among identical twins, which validates the biological theory; however, some compulsive behaviors are triggered by stressful events and those can be addressed to minimize their impact. Individuals who suffer abuse or other trauma sometimes develop redundant habits, from hoarding tendencies to body-focused repetitive behaviors such as picking skin or pulling hair.

Mental health professionals engage cognitive behavior therapy and habit reversal training, among other treatments, to reduce the negative effects of obsessive thoughts and compulsive actions. Psychiatrists have drug therapies to minimize symptoms as well. Results will vary according to the individual.

There are millions of people with at least one compulsive behavior and nearly any behavior can become a compulsion. It’s one thing to join the likes of singer Katy Perry, who admits to being “a little Howard Hughes about germs,” but when you can’t get to work on time because you check the locks all morning, it may not be helpful to leave your brain on autopilot. You can’t control every thought that comes into your head or hit an “off” button, but if you’re plagued by repetitive thoughts or actions, it could be time to seek a professional assessment.

Lowering Leg Pain: How to Kick Compartment Syndrome to the Curb

By Martha Michael The burden of intense competition weighs heavily on the hearts and minds of athletes, …