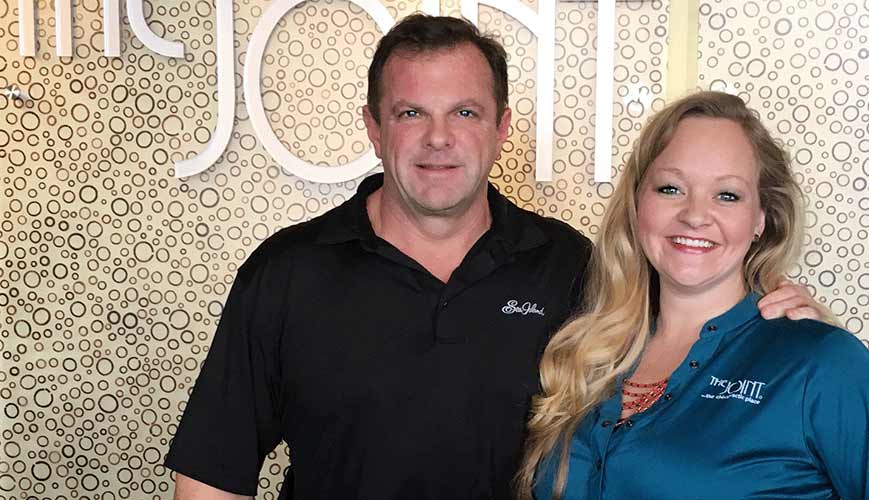 David Webb will never again describe his weekly visits to The Joint Chiropractic as “routine.”

The 48-year-old fitness buff is a patient at The Joint Chiropractic - Sandy Springs, and it’s a good thing. The day he saw Erika E. Henry, DC could have been his last had it not been for Dr. Henry and her assessment of a dangerous condition that was anything but routine.

“I credit my chiropractor with all but saving my life,” Webb said. “I would not have treated it with any concern because I just don’t get sick. I don’t have problems. I thought it was something I did while exercising.”

The reality was that Webb had a blood clot in his leg – a condition that, had it not been diagnosed by Dr. Henry, could have dislodged and killed Webb.

For anyone who ever thought that chiropractors aren’t “real doctors,” let this story serve notice.

A Day Unlike Any Other

“(Webb) presented for care with a complaint of leg and calf pains, which is fairly common for him to report, as he is very active in lifting and physical activity,” Dr. Henry explained. “However, my assessment revealed that he possibly could be dealing with a blood clot due to the symptoms.”

Webb’s symptoms included a mild limp in the left leg and a complaint of calf pain, according to The Joint records. He pulled up his left pant leg to reveal a red swollen and warm calf as compared to the right leg. His calf was also hard to the touch, with no pitting edema and no skin elasticity. He told the chiropractor he felt pain in his left hamstring and he described the timeline of his symptoms to her.

“On that fateful date [Dec. 19], I went in there on a Tuesday,” Webb recalled. “The pain and swelling started on Sunday and on Monday there was this burning irritation.”

By nightfall, Webb’s leg below the knee, including his ankle, was swollen. He began to massage his leg for relief.

“If I dislodged it, I would’ve died,” he said. “The next day I went to work as usual, going to a client’s company Christmas party, and I stopped at Erika’s, thinking, ‘I don’t know if there’s an adjustment for a swollen leg or ankle.’”

Dr. Henry examined his legs and asked a lot of questions, Webb said.

“Then, she very confidently and concerned, said, ‘David, I don’t want to scare you, but you’ve got a blood clot in your leg. You’ve got to get it looked at right away.’”

Dr. Henry called to Piedmont Urgent Care across the street to arrange an ultrasound for Webb.

“She got on the phone immediately, and I’m literally about to go to my lunch and deal with it afterwards,” Webb explained. “She called and said, ‘I’ve got a patient with a blood clot’ … and I asked, ‘Do I need to call my family? You’re starting to freak me out.’”

Piedmont told Dr. Henry that Webb would be transported to an emergency room or referred to a vascular specialist, which she shared with her patient. Instead Webb opted to call his primary care physician, who advised him to go to Emory Johns Creek Hospital as soon as possible. An ultrasound revealed a clot that had spread from his groin into his left calf.

“It was a big, nasty one,” Webb said. “They put me on blood thinners right away.”

According to Webb, his primary care doctor and ER physicians were impressed that Dr. Henry caught and immediately referred him for the appropriate care based on the symptoms he had on his weekly office visit to The Joint.

“Chiropractic medicine came into my life a few years ago,” he said. “The Joint came out and that was the best deal for a guy like me who likes to go every week,” he said. “I met Erika and she’s just been wonderful. She’s been a pleasure and I look forward to seeing her every week.”

To David Webb, he thinks of Dr. Erika Henry as a “little angel,” recognizing that without her expertise, the clot could have traveled to his lungs and caused injury -- or death.

“That’s a big deal any way you slice it,” Webb said. “She diagnosed it and saved my life.”